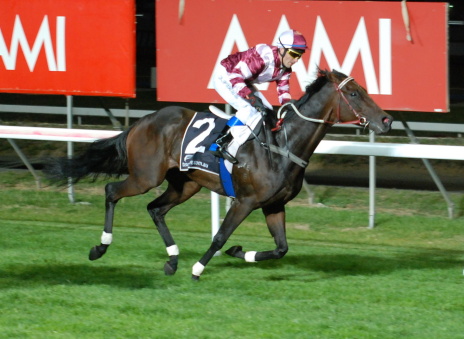 IF ever there was a horse that deserved to win another race it is Rave Night and the cards finally fell his way in an open handicap over 1400 metres at The TOTE Racing Centre in Launceston on Wednesday night.

Rave Night had to settle for second to the all conquering Youthful Jack in the first two weight-for-age features during the recent AAMI Tasmanian Summer Racing Carnival in Launceston and Hobart respectively.

Just prior to this latest win Rave Night finished a gallant fifth to Youthful Jack in the Tatts Group George Adams Plate over 1600m in Launceston in which he was beaten only four lengths with the winner scoring by over two lengths.

The Royston Carr-trained gelding was up against in-form mare Sorell Miss with punters keen to support the Dave and Scott Brinton-trained mare until a late swarm of money cane for Carr’s stable star.

The punters got it right as his price tumbled in late for him to start the popular elect at $2.30 ahead of Sorell Miss at $2.40.

Jockey David Pires opted to give Rave Night the gun run behind the surprise leader Beven Heights that held sway until the home turn.

Pires opted to stay on the rails and when Beven Heights drifted up the track at the top of the home straight forcing his main rival wide, Rave Night burst clear and held on to defeat Sorell Miss by a short half-head with Beven Heights hanging on for third 1-1/2 lengths astern.

Rave Night is part-owned by Michael Swan who holds a stable hand licence and he is one of the hardest and most dedicated workers at Carr’s Brighton stables.