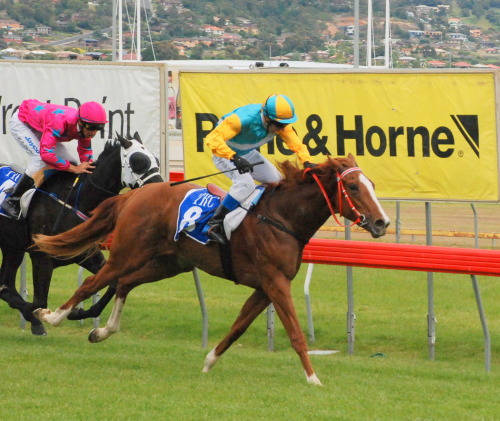 LONGFORD trainer-breeder Ken Hanson had plenty to celebrate after the first race on the nine-event card at Tattersall’s Park today.

Hanson’s well bred filly Reach The Moon scored a narrow but impressive win in the Betfair 2YO Handicap over 1000 metres.

Reach The Moon showed plenty of early speed to trail the leader Kinksky before drifting slightly to settle midfield on the rails.

With David Pires aboard she gained ground along the rails and eased off the fence to challenge Kinksky at the top of the styraight.

She kicked clear 100 metres out and held on to score narrowly from the favourite Pittenweem with Kinksky a close-up third ahead Skip To The Moon that finished off well.

Hanson said Reach The Moon’s full sister Asterisk, which his daughter Tanya purchased at the 2006 Tasmanian Magic Millions Yearling Sale, won on debut as a two-year-old in Hobart so this filly’s win was a replica of her sister’s debut effort.

Listen to what trainer Ken Hanson had to say about Reach The Moon’s debut win – click here .