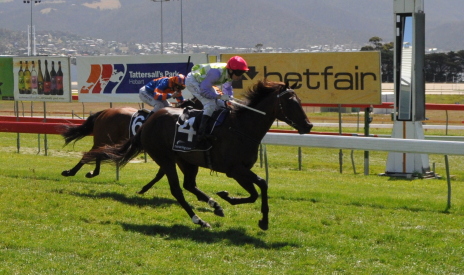 Group glory in a fortnight when she lines up in the Group 3 $150,000 Bow Mistress Stakes at Tattersall’s Park on Derby Day.

Rebel bride notched her fifth win from six starts this preparation when she demolished a classy field of fillies and mares in the Winzenberg Trophy over 1100 metres at Elwick last Sunday.

It was her fourth win in succession and her trainer Leon Wells confirmed the mare was on target to tackle the state’s richest fillies’ and mares’ race that was upgraded this season from Listed status to Group 3 level.

“This mare has done everything we’ve asked of her this preparation but it’s clear she is above average because she’s won five of her six starts this season and every time I raise the bar she answers the challenge,” Wells said.

Rebel Bride won on debut on Launceston Cup day last season and after that race Wells predicted she would develop into a star.

After winning a class four handicap three starts back in Launceston Wells set her for a benchmark 78 race on her home track on Devonport Cup day, which, on paper, looked to be a tough assignment.

She won that race by seven lengths with her head on her chest and would not have blown a candle out after the race.

“It’s great when they realise their potential and while she has done a great job so far this season there are a couple more steps to go,”

Provided Rebel Bride does well in the next few days, connections will most likely enter her for the Bow Mistress.

Given the prize money boost and the lift to Group status, the Bow Mistress should boast a field studded with some of the best sprinting mares racing in Victoria, with the exception of Black Caviar.

Rebel Bride is owned and raced by Chris Wickham and his wife Sharon.