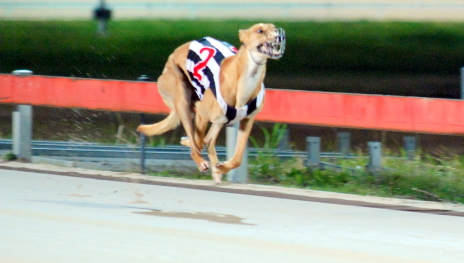 PUDZIANOWSKI proved beyond doubt he is one of Tasmania’s most promising greyhounds when he powered his way to an emphatic win in a heat of the Greg Fahey Middle Distance Championship in Hobart on Thursday night.

He set the Tattersall’s Park track alight setting a new record for the 599 metres of 34,21 seconds to better the previous best of 34.24 set by Thirteen Black in April last year.

The Russell Watts-trained dog had been very consistent over the shorter trips but he appears to have found his niche over the m idle distance.

On Thursday night he drew box two and showed blistering early speed to lead at the first bend and then extended that lead at every turn.

The son of Pure Octane hit the line over 10 lengths clear of Awesome Pedro with Piccolo Boy 1-1/2 lengths away third and just in advance of Ming Dynasty.

Watts said Pudzianowski had shown above average ability from the first day he trialed him and expects him to continue to improve with the National Distance Championships an option in the coming months.

The other heat was taken out by the Gary Fahey-trained Classy Kenny that scored a 2-1/2 length win over the consistent Harrison George with race leader Deadly Ernest a neck away third.

Classy Kenny was coming off the back of a string of minor placings but with the aid of the inside box (1) and a charmed run in the race he was able to emerge fro the pack turning for homer and go on and score comfortably.

Fahey said the dog deserved his place in the championship final and would make his presence felt if he has things go his way early.

“The dog is racing extra well and probably should have a few more wins to his credit had it not been for some poor box draws and no luck in his runs,” Fahey said.