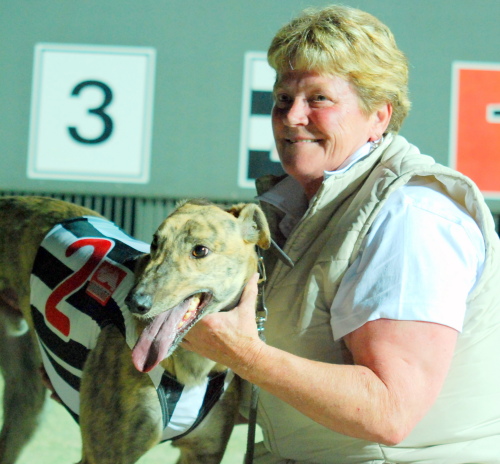 WHEN star Tasmanian dog Damek gave his rivals a galloping lesson to win his heat of the Group 1 Wrest Point Hobart Thousand at Tattersall’s Park on Thursday night the locals were crowing.

But two heats later the cream of the interstate invaders had crushed Damek’s track record on their way to convincing heat wins.

Last month’s Melbourne Cup placegetter Dee Winter was the first to break Damek’s record of 25.79 when he led most of the way and stopped the clock at 25.78.

But not to be outdone, the Darren McDonald-trained Octane Show began brilliantly from box six to lead in his heat and when he hit the line he owned the track record with a sizzling run of 25.75.

Damek won his heat in a time of 25.94 but no doubt he will be at his peak on final night and he’ll have to be if he is to grab Group 1 glory.

The brindle dog began only fairly from box two but he mustered speed quickly to have the lead after 50 metres and he extended the margin at both turns.

His splits of 5.14 and 11.08 were almost identical to that of Octane Show but McDonald’s dog had a more powerful finish.

Octane Show was fresh from a narrow defeat in the Group 1 Brisbane Cup in which he was run down in the very last stride.

McDonald has been chasing a Hobart Thousand victory for many years.

He has secured finalists such as the calibre of Brett Lee but even he couldn’t break the ice.

McDonald will have two finalists courtesy of his lightly raced blue dog Perfect Fancy scoring in the first of the eight heats.

The astute trainer was upbeat about the chances of his two representatives.

“Perfect Fancy is a very promising dog and he’s done a good job to make the final given this his first time away from home,” McDonald said.

“Octane Show is very smart and he showed that tonight breaking the record at his first start on the track,” he said.

“He campaigned well in Queensland and ran second in the Brisbane Cup so hopefully he can go one better here in Tassie,” McDonald said.

Damek’s trainer Eileen Thomas said she was thrilled to have a Hobart Thousand finalist and she was not fazed by her dog’s record being broken.

“I’m thrilled that he’s made it into the final,” Thomas said.

“I know everyone is expecting him to win because he is unbeaten on the track but this is shaping as probably one if the best finals in years.”

“”I’ll be happy if he does his best and if that’s good enough to win it, then so be it,” she said.

The final also boasts Damek’s litter brother Decembrist (Big Daddy Cool-World’s Finest) that is trained by Peter Phillips who also owns Damek and bred the litter in partnership with his wife June.

He led to the top turn with the favourite Shereen Bale hot in pursuit.

When Shereen Bale put it to Decembrist in the home straight Phillips’ dog dug deep and answered the challenge.

Decembrist went on to score by over two lengths from Shereen Bale with Smokin’ Gonzales a length away third.

Another local to make it through to the final is the Gary Greig-trained Octane Assassin that delivered the goods in style in the last of the eight heats.

After racing outside of the leader Eagle Eye to the homer turn he gave that dog the shoulder and burst clear.

He went on to score by over 10 lengths and while his time of 26.29s looked pedestrian compared to many of the others, his heat was run after heavy rain fell on the track.

Victorian trainer Kelly Bravo will be represented in the final by Kilty Lad that made the most of box eight to lead and power his way to an impressive two-length win over smart local bitch Ella Lucy.

Kilty went into the Thousand series with good form at The Meadows and Cannington, so with natural improvement he rates an outside chance in the final.

Kilty Lad is by Superman that won the 2006 Hobart Thousand and he clocked a time of 26.13 which is what his sire produced to win his Thousand.

Graeme Bate is a multiple Hobart Thousand-winning trainer but he couldn’t manage finalists from his eight entries that included Shereen Bale, Bremerton Bale and Steffan Bale.

However, NSW trainer Brendan Wheeler ensured at least one of the famous Bales has a presence in the final when his dog Numero Uno Bale produced a brilliant effort to win his heat in a time of 26.18 for what was his first look at the track.

Dee Winter also was having his first start on the track but showed a liking for the U-bend layout.

Dee Winter’s time of 25.78 edged out Damek’s personal best with his splits of 5.17s and 11.20s only moderate but his run home was sensational.

The winner of the Hobart Thousand will earn for his connections $75,000 and a silver trophy.

It has been a while since the final boasts dogs only and no bitches.