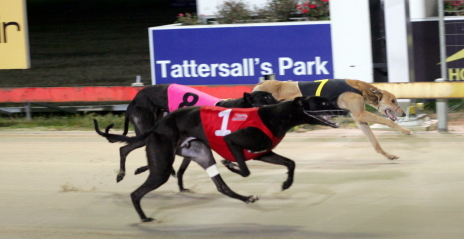 RED WATER raced his way into contention for the Division two title of the TGOTBA series with a convincing win in his heat last Thursday night.

The Alison Walker-trained dog went around at big odds but delivered the goods like an odds-on chance.

Red Water began well from box four and had enough early speed to cross to the rail before hitting the tip turn with the odds-on favourite Roo’s Blue hugging the rail and hot in pursuit.

Roo’s Blue tried to barge through nearing the home turn but Red Water refused to surrender the rail and skipped clear at the top of the straight.

Red Water went on to score by a length from the favourite with Classic Crime almost three lengths astern.

The Leon Brazendale-trained Jaylei Bill will make his presence felt in the final if he can mirror his heat winning form.

Jaylei Bill flew the lids carrying the red vest but all he wanted to do was get up the track and hit the tip turn wide on the track that allowed the heavily backed Awesome Naz ($1.60) to stroll through to take control at the top of the home straight.

But Jaylei Bill stuck to his guns and powered home to defeat Hellyeah Jacko and Awesome Naz by a half-length and in a time of 26.36.

The other heats winners were Monstra from the Margaret Rossendell kennel, the Anthony Bullock-trained Classic Camdale and Mookbana Rose prepared at Granton by Pauline Green.