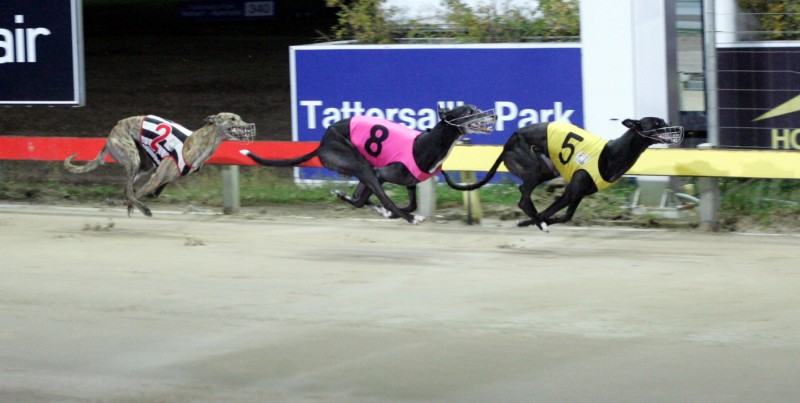 TALENTED sprinter Reddington did enough in his Easter Plate heat at Tattersall’s Park in Hobart last Thursday night to suggest he is about to come of age.

The Mick Stringer-trained dog that has just turned two has been creeping through his grades with this latest win his fifth from only 11 starts but he also has been placed four times.

At this latest assignment the son of Makeshift-Next Top Model was slow to begin from box six while Knox and Rattles and Izon Destruction began well to share the lead.

Reddington did what he normally does and headed right to the outside of the field and quickly gathered in the leaders by the time they reached the top turn.

He then ran wide on the home turn losing valuable ground but when be balanced up for the run home he powered past the leaders.

Reddington went on to defeat Knox and Rattles by over four lengths with Izon Destruction a neck away third.

Reddington clocked a time of 26.02 for th3e 461-metre trip and while it was marginally slower than two other heat winners it was the way he went about winning that impressed most.

Ted Medhurst provided two of the quickest heat winners in Mandy Charm and Demi Cali that clocked 25.95 and 25.96 respectively.

Mandy Charm led throughout to defeat Warehouse Mouse by 2-1/4 lengths and never looked in danger.

Demi Cali flew the lids from box eight in her heat to lead comfortably and powered up the home straight to score by eight lengths from her litter sibling Prescribe that started favourite and was a shade disappointing the way he finished off his race.

Mavista Falls (Fabregas-Miss Mint) from the Anthony Bullock kennel scored a convincing win in her heat, leading throughout to score by almost a length from the fast-finishing Maurie Baba with Rose Fern 1-3/4 lengths away third.

The Michael Dobson-trained Midnight Bird produced one of the runs of the night to emerge triumphant in his heat.

Midnight Bird settled near to last and was still fifth turning for home and six lengths off the leader.

But he unleashed a powerful finishing burst to get up and score by almost a length from Teemac with Simpsons Bay nearly two lengths away third.

Each of the five winners and the three fastest seconds progressed to next Thursday night’s final.