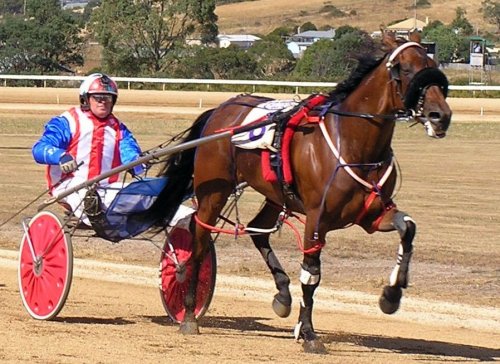 REDSIDE SHREK confirmed his status as a rising star when he scored a runaway win in a free-for-all over 2090 metres at Tattersall’s Park in Hobart last night (Sunday Sep 13).

The Paul Williams-trained five-year-old gelding was facing open company for the first time but he handled the assignment with consummate ease.

“That was very exciting and to be honest I am surprised how easily he won the race,” Williams said.

“I expected him to win because he has been absolutely flying on the training track but there were a couple of very good horses in the race and to do what he did to them is quite amazing,” he said.

Redside Shrek was coming off an equally impressive win in Hobart a fortnight earlier and Williams said that win was special.

“At his previous start he rattled off a 56.5 last half to win and made his run a long way from home but he’s done something similar again so I guess he really is turning into the horse we all hoped he might be,” he said.

Emery settled the gelding near the rear of the small field of six while Rock And Run set the speed in front for the first half of the race with Jilliby Rio facing the breeze.

Redside Shrek in the one-out-two-back position and Fleet Express with a clear view of the entire field.

When Emery called on her charge to stake his claim three-wide the gelding quickly hauled in the leaders and was not fully extended to win.

He ran home his last half in 57.7 for a mile rate of two minutes.

“He wouldn’t have blown a candle out after the race and Natalee said he started to switch off soon after he hit the front,” Williams said.

There are no plans to take Redside Shrek interstate in the immediate future.

“The temptation is there to try him out in Melbourne but why should we risk taking him there with a chance of him getting his butt kicked and lose his confidence when we can stay at home and go around in free-for-alls once a fortnight with $5000 up for grabs each time.”

“I have no doubt we will eventually head across the water but he is still maturing and I want to make sure he’s experienced enough to take up that sort of challenge (interstate campaign),” he said.

With many of the well-performed open class horses still off the scene spelling, Williams said he is looking forward to the proven top grade open class horses returning, such as the Grant Hodges-trained Yakuza that dominated last season.

“Yakuza was the yardstick because he’s beaten the best here and gone to Melbourne and won, so when he and a few others return to racing it will be interesting to see how Shrek measures up,” he said.

Williams has not driven for a few months due to a back injury but Emery has proven to be a suitable replacement.

“Natalee (Emery) has had seven drives for the stable for seven wins, so she’s done a mighty job,” he said.

Williams goes into hospital on Friday for surgery on his injured back and he is desperately hoping the operation is successful.

“The operation is to remove part of the cartilage in a disc in my lower back that is causing my sciatic problem that prevents me from driving (horses),” he said.

Williams has only a small team of four in work comprising Shrek, Iden Rocky, stable newcomer Dallas Jerome and a lightly raced three-year-old that joined his team a few weeks ago.

“The four horses is enough at the moment because Maree (partner Maree Blake) is doing all the trackwork, but I’ve got a lot almost ready to come back including Gamblers Rustler.”

“When we are at full strength around Christmas I reckon we’ll have up to a dozen in work so this operation better work,” he said.