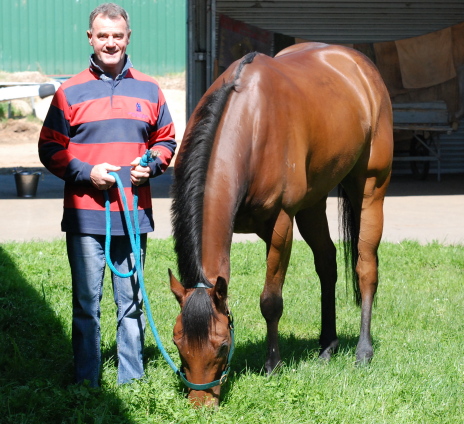 BRIGHTON trainer Gary White walked into the box of Remmi Raider this week and when he peeled back the horse’s rug it revealed a sight that would suggest the gelding could be very hard to beat at his first start since undergoing a successful leg operation.

Magnificent, is the only way to describe how Remmi Raider looked and when he strolled out of his box for a photographic session he made the most of the lush green grass in the middle of the stable complex (as pictured).

Remmi Raider, that has been off the scene for 19 months, won two in succession towards the end of his last campaign as well as grabbing multiple minor placings.

But at his last start he injured his offside fetlock joint that required surgery.

One of Australia’s top equine surgeons Dr Alistair McLean performed the operation that required screws being inserted in the joint and the gelding has emerged from the procedure as good as new.

Remmi Raider will line up in the last race on the 10-event card at Tattersall’s Park in Hobart on Sunday, a benchmark 68 handicap over 1200 metres.