Renaissance Franco back in the picture 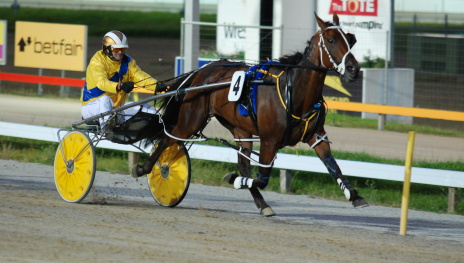 TALENTED harness racing trainer Juanita McKenzie has only two horses in work at her Colebrook stables these days but it hasn’t stopped her from dominating with both of her stable tenants scoring impressive wins at Tattersall’s Park in Hobart last night.

Renaissance Franco produced a form reversal to score impressively in a C1-C2 over 1609 metres while Genuflect made the most of the pole position to lead all the way in a C2 over th4 same journey.

She fought off all challenges in the home straight to emerge victorious by four metres from The Innkeeper with Dusty Kalena a metre astern.

For Renaissance Man it was a return to form after some very ordinary performances since arriving from Victoria in early January.

She was unplaced and finished well back at her first three starts since arriving from Victoria where she had excellent form returning three wins and five minor placings from only eight starts.

The five-year-old mare was purchased in New Zealand as a three-year-old and made her debut in November 2010 and was placed at her first three starts.

She resumed last November with a win at Bendigo and from four subsequent starts she scored two wins and was third twice in C1-C2 company.

McKenzie said subtle gear changes had made a big difference to her trackwork and last night’s win was no surprise.

Punters rallied for her and sent her around the $1.60 favourite.

Listen to what trainer Juanita McKenzie had to say about the wins of Renaissance Franco and Genuflect – click here.