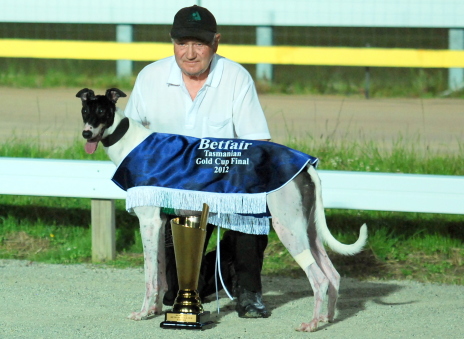 REWIND continued his love affair with the Hobart track last night with another impressive win with this latest effort netting him the Betfair Gold Cup final over 461 metres.

Rewind began well from box six but not as quickly as Franklin Bluboy that led the field clearly to the top turn.

But when Rewind cruised alongside the leader as they were about to straighten for the long run home the end result was a foregone conclusion.

Rewind ($1.40) forged clear and went on to score convincingly from Place Your Bet and Ready To Rock.

He clocked a handy 26.11 which was clearly the best of the night and one of the slickest runs on the track since it was re-sanded 10 days prior.

The Morris Strickland-trained dog has not been beaten in Hobart since February when second to Penny’s Angel and the only other time he’s been beaten on the track in the last year was when  second to Dyna Tron in last year’s Hobart Thousand final beaten in the last stride.

The heats of the Tattsbet Hobart Thousand are just two weeks away and Strickland is hoping rewind can make the final to try and go one better than last year.

“The dog is doing everything I have asked of him and this is his ninth consecutive win and I think he’s only been beaten on the Hobart track once since last year’s Hobart Thousand final,” Strickland said.

Rewind has won his past nine but his record in the past year in Tasmania stands at 21 wins from 29 starts.

Strickland has never been one to blow his own trumpet but when it comes to his kennel star he prefers to let the dog do the talking.

One of his most amazing statistics is that he has drawn the squeeze box (5) 12 times but won 10 and been placed twice.

The dog is no spring chicken as he’s rising four but as Strickland pointed out he hasn’t been over raced.

The heats of the Tattsbet Hobart Thousand will be held at Tattersall’s Park on December 13 with the Group 1 final a week later.