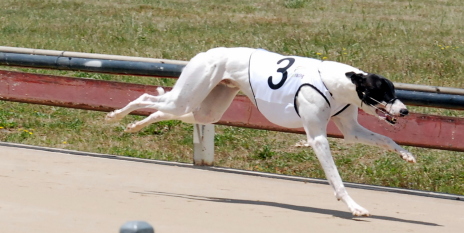 TASMANIA’S star greyhound Rewind powered his way into next week’s Devonport Cup final with an emphatic win ion his heat at the Devonport Showground today.

Last year’s Devonport Cup winner and dual Hobart Thousand runner-up was awesome in his demolition of the opposition in the first of eight heats.

The Morrie Strickland-trained dog covered the 452-metre trip in 25.52s and will go into the final for his title defence as a warm favourite.

It was a mixed day tor favourites in the remaining heats with the Graeme Moate-trained Shanlyn Peanut causing the biggest upset in winning her heat at odds of $30 defeating $12 chance Millie Grace and Sofia Elise that started at $14.

The Margaret Rossendell-trained blue dog Franklyn Bluboy delivered another knockout blow to punters when he won his heat ($8.60) ahead of Black Cairo and Shanlyn Poh while the Graeme Bate-trained Gordon Bale was backed in to start the $2.10 favourite but could only manage to finish fourth.

Bate,Victoria’s most coveted greyhound trainer, managed to get two of his eight candidates into the final.

Brighton trainer Brendan Pursell will have Burnt Fuse representing his kennel in the final after he toyed with his rivals to be a very impressive heat winner and Ted Medhurst secured a finalist courtesy of Katsidis winning his heat at odds of $10.

The Anthony Bullock-trained Hellyeah Stella completed a dirty day for punters when she cruised into the final with an emphatic win over Left Seattle and Ice Trucker at odds of $7.60.