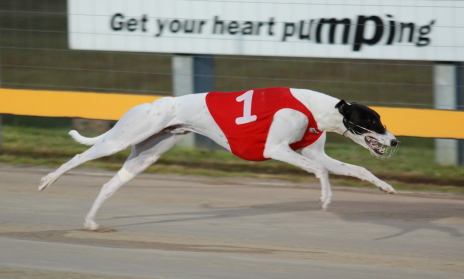 The best performed of the five local stars to make it to the Group 1 Aceland Stud Hobart Thousand final was Rewind that matched produced an identical time to that of Melboiurne Cup winner Dyna Tron that also made it to the final.

Rewind, from the Morrie Strickland kennel, sizzled out of box one and rattled off a first split of 5.04s (fastest of the night) and he then reeled off a second split of 10.97s that mirrored that of Dyna Tron.

Rewind’s run home was a fraction slower than Dyna Tron but their overall times were the same.

Strickland was delighted with his dog’s effort and said the Hobart Thousand has been the dog’s target for some time.

“He went to Melbourne and raced there for about three months with Darren McDonald but our long range plan was always to set him for the Hobart Thousand,” Strickland said.

“We brought him back to Tassie a bit later than we wanted to originally but he’s done the job tonight and I’m rapt,” he said.

Rewind has an exceptional record on the Hobart track with this latest win his seventh from nine tries and he was placed second at his other two attempts and all over 461 metres.

“The dog loves this U-turn track and as long as he can begin like he did tonight he will keep them honest in the final.

Strickland has yearned to win the race and he believes Rewind is his best and maybe his last chance to win the time honoured event.

Clyde’s Angel, prepared at Rowella by Terry Penny, made her way into the final with a vert classy effort to win her heat.

Clyde’s Angel began well from box eight but had to work three-w-de until she hit the top turn where she crossed to the rail and then went o to win by over five lengths from the consistent Innisfree Miss.

Mick Stringer knows what it takes to win a Hobart Thousand having been successful with Little Spaniard three years ago and he helped prepare Prankster to win the race the following year with top Victorian trainer Robert Britton.

Stringer’s kennel star Bergermeister won his way into the Thousand final with an impressive heat win.

The Hobart track record holder showed great courage to win his heat as he was bustled and bumped most of the way to the top turn but he sped clear and went on to win by almost two lengths from I’m A Fencer with the Graeme Bate-trained Shereen Bale 1-1/2 lengths away third.

Bergermeister suffered a near career-threatening injury when he crashed through a gate at Stringer’s training complex earlier this year.

The dog was nursed back to health and until a week before the Thousand heats Stringer was unsure if the dog would find his old sparkle.

But he won the Barry Heawood Hobart Thousand Prelude two weeks ago and that convinced his trainer that the dog was back on track forma serious tilt at Tasmania’s only Group 1 race.

It’s been a while since David Crosswell has had a runner in the Thousand but he has a live chance in the final with Galtee Again that was very impressive in winning his heat.

Galtee Again began well from box eight but was unable to match it with the speedy Radley Bale (3) and New recruit (4) that matched motors to the top turn.

But Galtee Again was able to muster speed to cross them at the top turn and he went on to score by almost a length from this year’s Golden Easter Egg winner Radley Bale with New Recruit over two lengths away third.

Galtee Again stopped the clock at 26.05s which was a personal best for the dog that has won five from 11 on the Hobart track.

Brighton trainer Ted Medhurst prepared Sandbanker to win his heat, much to the chagrin of punters who unloaded on Damek and sent him around the $1.50 favourite.

Sandbanker showed good early speed to be camped just off the pacemakers Damek (4) and Penny’s Angel (1) that engaged in a bumping duel all the way to the home turn.

Damek checked out of it and was spat out to last while Penny’s Angel sped clear.

But she was sitting duck for Sandbanker that ran home strongly to win by almost a length from Penny’s Angel.

Medhurst was thrilled with the dog’s performance.

“This dog has come a long way in a short space of time,” Medhurst said.

“He has gone from a maiden to getting into a Group 1 final in the apace of 15 starts so he has definitely done a great job,” he said.