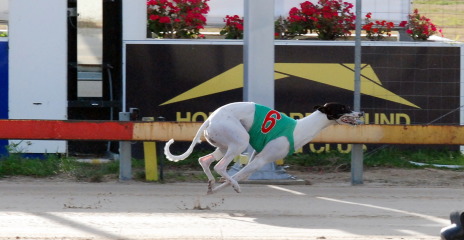 BRACKNELLtrainer Maurie Strickland has had some good chasers over the years but the latest young gun to land in his kennel could be his best.

Rewind has won 15 of his 20 starts and at Tattersall’s Park inHobarttoday he scored an impressive win in the Rapidvite Tasmanian Country Derby over 461 metres.

Rewind won hisDerbyheat the previous week and was sent out the $2.70 favourite and his backers never had cause for concern.

The dog forged to the lead from box rise and when challenged in the home straight he dug deep to eventually go on and score by three lengths from Galtee Again with Where’s Magpie closing late for third just under a length astern.

Rewind is one of a brilliant litter by Collide from Ricky’s Angel that also produced the first and second placegetters, Miss Roman Nose and Clyde’s Angel, in the Rapidvite Tasmanian Country Oaks.

Strickland was thrilled with the win and heaped praise on the dog.