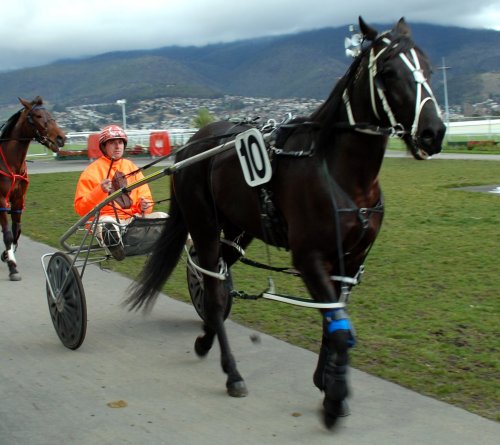 ROGER BROWN was arguably the most frustrated trainer at the Hobart meeting in Tasmania on Sunday night after his four-year-old Rhetts Way disgraced himself by racing erratically.

Rhett’s Way was sent out the $2.10 favourite in a 4YO Pace over 1609 metres and those who took the short odds were feeling reasonably happy when he showed speed to lead fro the pole position and settled well in front.

But heading down the back straight the last time favourite backers were left gasping when the well-bred gelding appeared to try and pull up when challenged strongly by Liskens Gift and then he drifted up the track nearing the home turn.

When he left the fence it opened the door for eventual winner Touchwood Bobsta to burst through and go on and score impressively from Liskens Gift and Carrigdhoun with Rhetts Way coming again to finish fourth.

Brown was upset after the race and understandably so.

“If he didn’t have so much ability you’d probably sack him but we will keep persevering,” Brown said.

“When he came back after a short two-year-old campaign he injured the annular ligament (located just above the hoof) in his nearside front so we took the advice of vets and gave him a long spell.”

“He was out for a year and missed all but the very last 3YO race of last season in which he ran a great first-up second.”

“But this problem he showed last night has me a bit baffled because he hasn’t been showing any signs of favouring his nearside front in trackwork, in fact he’s been seemingly trouble free throughout the preparation,” he said.

Rhetts Way scored an impressive win at only his second race start as a two-year-old to signal his arrival as a potential top liner.

“He looked to have the makings of a real good horse as a two-year-old and when he came back from the long spell everything looked great until last night.”

“The problem might just be in his head (psychological) and if it is, then we have to try and find a way of sorting it out.”

“I have no doubt he is a genuine sit and sprint horse and if he gets that sort of run he’s a different horse but maybe with time he’ll be more adaptable,” Brown said.

The trainer said he had more of an opinion of Rhetts Way as a two-year-old than his recent MooneeValley winner Cancellara.

“When Cancellara started racing he wasn’t near the horse Rhetts Way was at two but all of a sudden the penny dropped withy Cancellara and he went from a horse that couldn’t qualify for the Eric Reece series final to winning a 3YO at MooneeValley.”

“Hopefully time and experience will have the same effect on Rhetts Way,” he said.