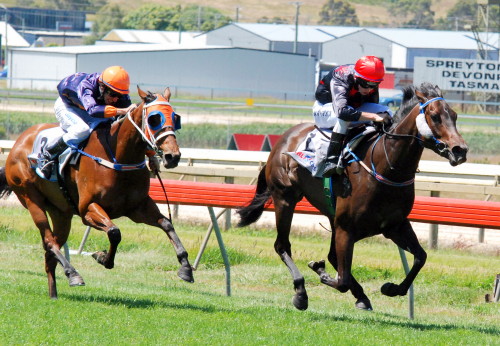 IMPECCABLY bred three-year-old filly Lagosky’s Daughter (Danbird – Lagosky x Encosta de Lago) emerged as a potential star of the summer when she outgunned the talented Lonhro filly Beau Vallon in a 3YO handicap over 1000m at Devonport today.

Beau Vallon was sent out the $1.80 favourite and with claiming apprentice Ronan Keogh aboard she looked to have Lagosky’s Daughter well held 100 metres from home.

But under strong riding from in-form jockey Justin Hamer, Lagosky’s Daughter knuckled down to her task and hit the line a head clear of the favourite to score what trainer Vicki Rhind described as a “mighty win”.

She went into the race unbeaten from her other two starts this season and to notch the hat trick over such a classy rival has given Rhind added confidence going forward with the daughter of Danbird.

“I have thought all along that this filly might be even better over a bit more ground and the report I got from Justin (Hamer) today has reaffirmed those thoughts,” Rhind said.

Lagosky’s Daughter was the third leg of a winning treble for the Rhind stable.

Her previously disappointing four-year-old Albert Street caused a boilover when he streeted his rivals in the Robert Ferguson 3YO and up Maiden over 1175m.

And in the following race her talented six-year-old Given Sunday stormed home from well back to score a last-stride win over Flash Lad in the Veolia Environmental Services Class 4 Handicap over 1175m.

Listen to what trainer Vicki Rhind had to say about Lagosky’s Daughter’s win – click here .