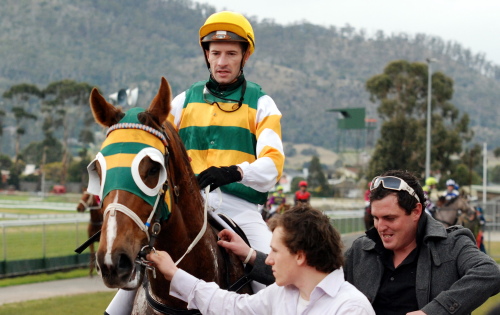 RIALTO JOHN ended the 2010-2011 season the best way possible with a impressive win in the Boags Premium Maiden Plate over 1100 metres at Tattersall’s Park in Hobart today (Sunday).

The Dave and Scott Brunton-trained three-year-old settled just off the pace from his wide draw and when jockey Lee Smith asked for the big effort turning for home he claimed the leaders and went on to score convincingly from Stacy Ann and Chosen Flyer.

It was only his third and co-trainer Scott Brunton said the win was not a surprise.

“We gave him his first start back in February and he ran a very nice third so we put him out for a short break and brought him back to try and win one before we tip him out for a decent spell,” Brunton said.

Listen to what Scott Brunton had to say about Rialto John – click here .