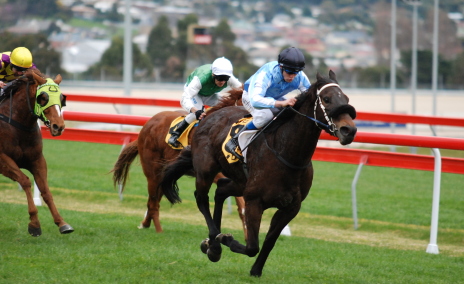 LIGHTLY raced four-year-old mare Rich Bonus appears to have fond the form that had her being touted as a potential star 18 months ago.

Rich Bonus impressed with a win on debut in a 2YO Maiden on Derby Day in early February last year after which she was spelled.

She resumed five months later with a win in a class one handicap at Mowbray against older horses.

Trainer Gary White opted to send her to Melbourne where she had two starts but failed to flatter owing to her not handling the travel.

She also failed at two subsequent starts back in Tasmania after which White tipped her out for another spell.

White sent the mare to Christie Burt who he regards as one of the best and most professional pre-trainers in the state and this time in Rich Bonus has regained the spark that she showed early in her career.

On Sunday she showed her customary early speed to lead and when she looked like being overhauled at the business end of proceedings she refused to wilt and staved off all challenges over the final 100 metres.

Rich Bonus hit the line over a length clear of Elle Of A Westerly and Beau Vallon.

Listen to what trainer Gary White had to say about Rich Bonus’ win – click here .