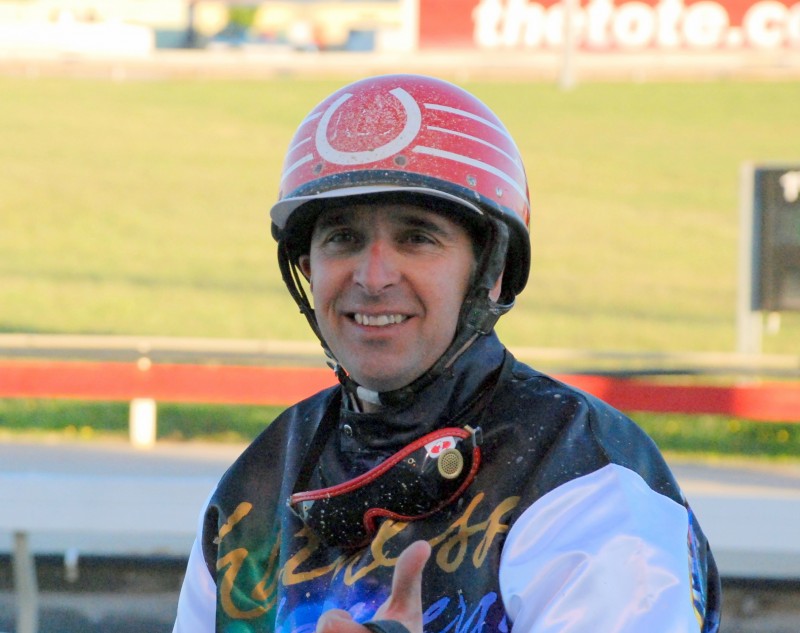 Hall Of Fame member Ricky Duggan won the first two races at Launceston on Sunday night. Cardinal Art was the first for Riverside trainer Chester Bullock. Duggan sat quietly on the 6YO gelding until the last lap when he eased three wide before clearing out for an easy seven metre win ahead of Butch And Clyde (Adrian Collins) and Ive Got Oomph (Paul Williams).

Duggan followed up with Tisu Toota in the Claimer. The Zane Medhurst trained 7YO gelding settled midfield in the running line and responded to Duggan’s urgings in the straight to prevail in a blanket finish from Washies Chance (John Walters) and Melpark Maestro (Gareth Rattray). Duggan is second on the state drivers table but with 52 race meetings conducted already and 34 to go it is hard to imagine the close knit group around Duggan can catch the tearaway leader Gareth Rattray. The leader board is Gareth Rattray (69 wins), Ricky Duggan (36), Rohan Hillier (34), Todd Rattray (34) and Nathan Ford (32).

The two high priced yearlings from the 2014 harness yearling sale quinellaed the colts and geldings division of the $10,000 Yearling Sale Classic. Ryley Major reached $16,000 at the yearling sale and Soho Shanghai $14,000 and the stablemates exploded away from the other four starters at Launceston on Sunday night with victory going to Ryley Major (Rohan Hillier) by three metres to Soho Shanghai with Spot Eight (Gareth Rattray) third. The fillies division was literally a one horse race when Iden Blue Byrd was the only acceptor. Connections of Ryley Major and Iden Blue Byrd pocketed $10,700 each being $6,700 for winning, a $2,000 yearling sale win bonus and a $2,000 Tasbred Bonus.

Well-bred 3YO gelding Parwill maintained his perfect record (two wins from two starts) for Melissa Maine (trainer) and Gareth Rattray (driver) when he sat outside the leader Grace Campbell (Erin Hollaway) before surging away from the filly to win the Bevan Lee’s Butchery Stakes by nine metres with Fortino (Todd Rattray) third. Parwill is a son of the Bandbox and Granny Smith winner Adalina and was placed fourth and sixth at two starts before entering the Maine stable in March this year.

Erin Hollaway and Lyarna Graham’s absence from the winners circle was halted at Launceston on Sunday night and each produced a gem of a drive. Holloway won with Chirac at Launceston on 5 October 2014 and was having her fifth drive since then on the Grant Hodges trained El Jays Magic in the Micks Fruit And Vegie Shed Stakes. Hollaway didn’t panic when the 5YO mare landed outside the leader, The Majority ($1.60 fav), and proceeded put the field away with a 27.4 last quarter to win by six metres from Ciskei (Todd Rattray) and Clamorous (Adrian Collins).

Graham’s last winner was Ill At Ease at Hobart on 14 April 2014. At 25 subsequent drives she has been a regular placegetter without winning but that changed when she piloted Punt Road Disco to victory at Launceston on Sunday night. The Andrew Rawlings trained 6YO gelding started from the outside barrier on the front line and Graham did well to land midfield with cover before sprinting late to beat Luke Peter (Ricky Duggan and Ramplestiltskin (Rohan Hillier).