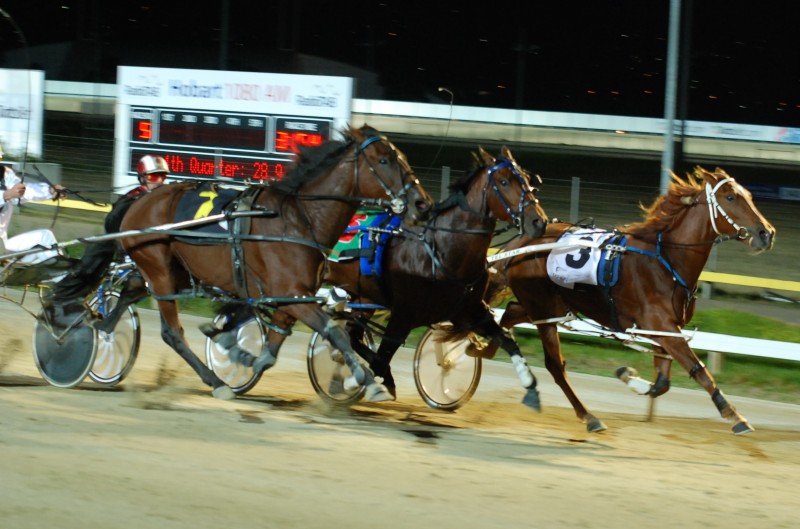 CONSISTENT three-year-old pacer Riverboat Jasper will only need to hold his present form to be a major contender in this season’s Globe Derby to be run in Launceston at the end of next month.

The gelding’s Scottsdale-based owner-trainer Wayne Campbell predicted last season that Riverboat Jasper would develop into a very good three-year-old and he was right.

Riverboat Jasper notched his sixth win of the season when he defied a tough run to win the Chartley Estate Stakes over 2200 metres in Launceston last Sunday night.

The gelded son of Riverboat King has won six from 10 with three minor placings from his 10 starts this time in.

He had only two starts as a two-year-old for a second in a Dandy Patch (sires stakes series) heat and followed up with a fast-finishing third behind Palmisano in the final in July last year.

He resumed racing in January with a win at Devonport and proceeded to win his next three starts before having no luck in the St Leger in Launceston won by Ginger Bliss.

Riverboat Jasper went on to finish a close-up second to Ginger Bliss in the Tasmanian Derby and the only other time he has had his colours lowered this preparation is in the Prince Of Pace in Hobart two starts back when beaten by Pachacuti.

Riverboat jasper has been driven throughout the season by Rohan Hadley who believes the gelding has what it takes to win the Globe Derby.

“Some horses don’t respond after a tough run but this horse keeps on getting better,”

Riverboat Jasper was caught three-wide for much of the first 500 metres last Sunday night but Hadley opted to serge forward to find the lead.

Despite having to work hard early and then fight off determined challenges over the last 300 metres to go on and win by over three metres from Punt Road Disco with Deliverthegoods a close-up third.

The Globe Derby heats will be run in Launceston on June 16 with the final run at the same venue two weeks later.