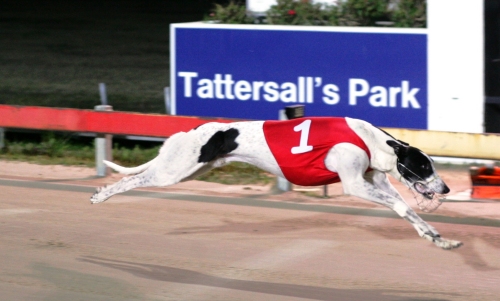 FORMER Victorian dog Riverdance Kid had his dancing shoes on in Hobart last Thursday night where he scored a very impressive win at his first try in the state.

The Keith Nichols-trained dog didn’t begin all that well from box one but he mustered speed quickly to assume control.

Once on the bunny he sped clear to hold a commanding lead at the top turn and he then he powered away from his rivals in the home straight to score by over six lengths from Hez Regal with Wild Weekend a half-length astern.

Riverdance Kid (Larkhill Jo-Portlee) had 11 starts in his home state for four wins and as many minor placings.

He started out on the bush track at Healesville where he won two before venturing down to Geelong for an unsuccessful attempt at a grade five but two starts later he redeemed himself with an impressive win over El Generale in good time over 457 metres back in March.

He continued to race well on the provincials before being dispatched to Nichols in July.

Riverdance Kid stopped the clock at 26.17 over the 461 metres on the U-bend circuit at Tattersall’s Park suggesting there are more wins in store at all three racks in Tasmania if he can run that time at his first attempt.

Nichols has a handy team of dogs in his Broadmarsh kennels with Riverdance Kid likely to be the star act in the coming weeks.