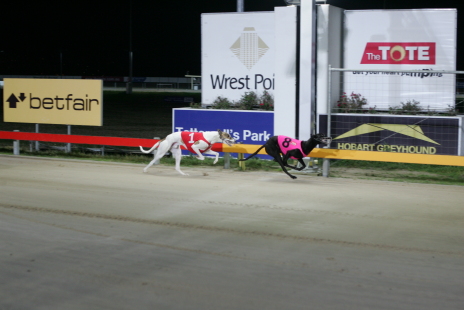 Followers of Mangalore trainer Ted Medhurst would be still counting their cash this morning after Rob Pines saluted in the first heat of the Young Star Classic at Tattersall’s Park last night.

Medhurst is back to his best, with a team of greyhounds that consistently perform, he has now accumulated 57 winners just seven behind leader Russell Watts for 2011 calendar year.

Rob Pines enjoyed jumping from the pink and basically led from box to post setting splits of 5.16 and 11.20 and recording a final time of 26.16.

This son of Bombastic Shiraz for owner Craig Cassidy has had the five starts for two wins, the other at Launceston, when he was sent out the $1.70f but last night was despised in the betting starting at 20/1.

Place Your Bet started at the prohibitive odds of $1.50 and ran second however trainer Ted Devine was happy with the run.

“He hasn’t seen a racetrack for almost a month, trialling only on the straight track at Brighton, so that run will do him the world of good”

Place Your Bet seemed to roll out of the boxes but still managed to hold the rails in second spot before his run petered out before the line going down by 1 1/2 lengths with Mick Stringer’s Victorian Educated Cash third a further 2 3/4 lengths away.

The other heat of the Young Star went to the Russell Watts trained Sour Pop, who brought up a hat trick of wins with a strong 26.23 run storming home to overtake “pacemaker” Domenic’s Joanne to win by 2 lengths.

Our Silhouette ran a good race for Peter Higgins to hold third only a half length further back.