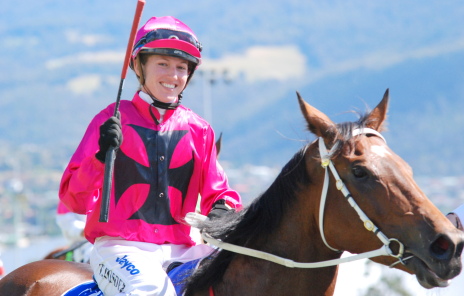 TALENTED Victorian fly-in apprentice Talia Rodder wrapped up the state’s apprentice premiership with a career-best four winners at The TOTE Racing Centre in Launceston on Sunday.

Rodder’s haul took her to 36 wins for the season and three clear of her nearest rival Ronan Keogh who suffered a broken collarbone in a training track mishap two weeks ago that will keep him sidelined for about eight weeks.

Rodder began riding in Tasmania at the start of the season and during that timer she has earned a reputation as a talented young rider, evidenced by her standing on the overall jockeys table where she sits in fourth spot.

Her previous best haul was a treble in Hobart but this most recent bunch of wins will be far more memorable on many fronts.

She set a goal of winning the apprentices premiership and while it was almost handed to her on a platter courtesy of Keogh’s injury, she hopes to climb further up the premiership ladder with third place her quest.

Rodder has ridden 36 winners and is eight behind third-placed Kelvin Sanderson who was winless on Sunday.

Listen to what apprentice Talia Rodder had to say about her day out in Launceston on Sunday – click here .