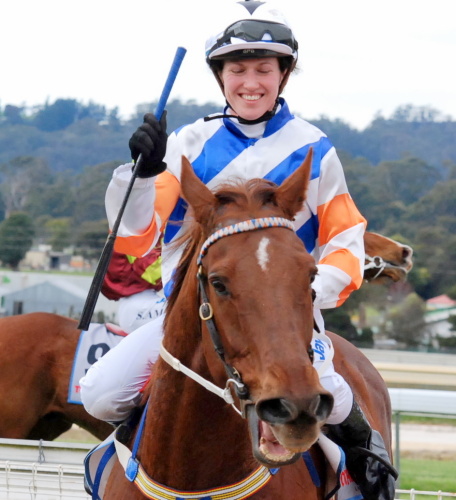 VISITING Victorian apprentice Talia Rodder notched her first win in Tasmania when she guided the Mark Ganderton-trained gelding Hindu Lion to victory in the Mr Innocent 0-66 Handicap over 1175 metres at Devonport on Sunday.

Rodder was instructed to ease Hindu Lion out to the rear of the field early and then take him to the outside in the home straight to make his run.

She followed her instructions to the letter and Hindu Lion did the rest.

The gelding powered home to score by four lengths from race leader Stormbay Spirit with Parched a fast-finishing third.

Rodder has been riding in Tasmania for about a month with Sunday’s meeting her fourth.

She is a natural lightweight who has rode over 60 winners in Western Australia where she began her riding career in Australia as an apprentice to Fred Kersley.

Rodder was born in Israel where she learned to ride and where she ignited her interest in horse racing.

Listen to what apprentice Talia Rodder had to say about her first win in Tasmania and how her career has unfolded – click here .