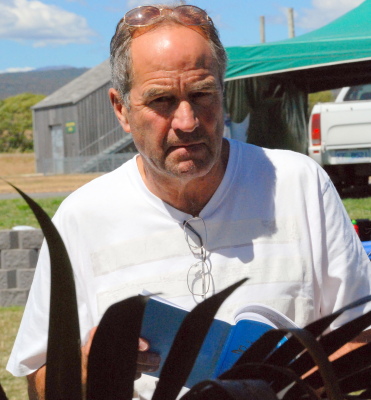 Rogers and Brighton-based trainer Philip Ford have forged a great partnership and in Launceston on Sunday night their six-year-old Ulos stamped himself as a potential feature cups candidate with a convincing win in the Big Park Show Cup over 2200 metres.

With the trainer’s brother Scott Ford aboard, Ulos tracked the leader Death And Taxes before easing off the fence to face the breeze a lap fro home and when he called on the gelding in the home straight he delivered the goods to score narrowly from Death And Taxes with Maggies Son five metres away third.

“Ulos has come along nicely and now that he’s proven to be competitive in a stand and against decent opposition, we might even head him towards the feature cups during the upcoming carnival around Christmas,” Ford said.

“It took us a while to work him out but once we worked out he was better with a sit than being pushed out early he’s been a different horse,” he said.

Rogers has nine horses at Ford’s stable including a couple of the youngsters he purchased at this year’s Tasmanian Premier Yearling Sale in Launceston in January.

“Gary has been a great supporter of the stable and is one of my biggest owners,” Ford said.

“A Western Terror colt and a BettorsDelight-CamRiver filly that he bought at the sales are coming along nicely and both are likely to be early two-year-olds,” Ford said.

Meanwhile, Ulos will tackle another discretionary handicap in Hobart this Sunday night after which he will be freshened up for a tilt at the feature cups over the Christmas-New Year.