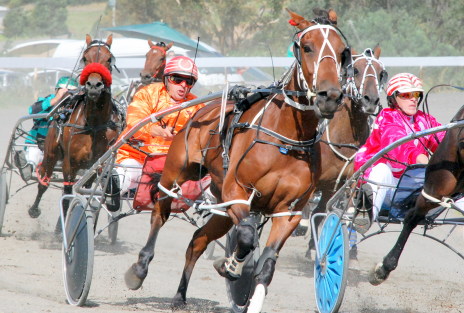 DEVONPORT harness racing trainer Adam Emery gained a quick return from the most recent addition to his stable when Roman Times scored a last-stride win at Burnie last Saturday.

Roman Times scored a convincing win at New Norfolk on Australia Day when in the care of Adrian Duggan but after subsequent failures in Hobart and Devonport connections decided to leave the gelding with Emery to race around the Coastal region.

Roman Times has obviously taken to the clean fresh air that gusts over Emery’s training complex at Spreyton because he handled the tight turning Burnie track with aplomb and he was the one most punters wanted to be on when Natalie Emery called on him for the supreme effort leaving the back stretch the last time.

Starting at the lucrative price of $20, he hit the line with a head to spare over Loaded Bomber with another outsider Risenshine about five metres astern.

Roman Times (Julius Caesar-I’m Sassi) showed a lot of promise early on finishing no further back than fourth in five of his six two-year-old starts.

The owners gave the horse over a year off just after he turned four with Duggan of the belief that some of Julius Caesar’s progeny need time to mature and he felt Roman Times fell into that category.