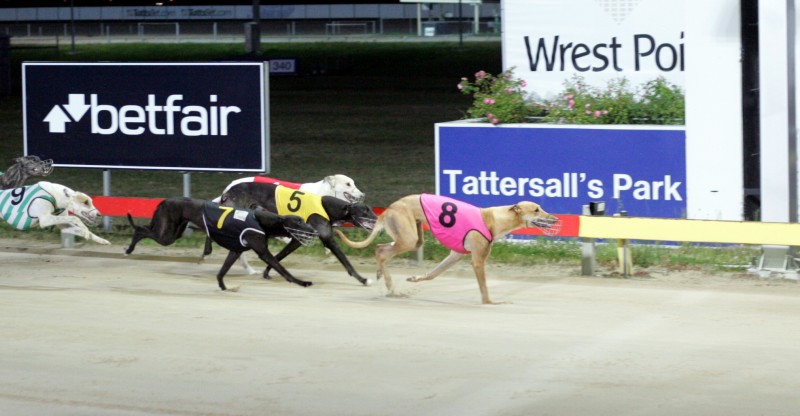 TALENTED pup Rory Mac made his way into the O’Driscoll Coaches grade five final by finishing second to the highly promising Lovely banks but a decision to run him at Devonport in between his heat win and final paid big dividends for trainer Sonia Martin.

Rory Mac ran in his heat last week but he also tackled a Juvenile over 452 metres at Devonport this week prior to contesting the O’Driscoll Coaches final.

Not only did it serve the dog well from a race fitness perspective but he also won the Devonport event, albeit at the short price of $1.50.

Despite being buoyed by the Devonport win Rory Mac ($3) began only fairly from box eight and stayed wide to the top turn while the favourite Lovely Banks ($2.60) also missed the start wearing the black vest and was cluttered up in the back half of the field.

Explosive Gas (x Fabregas) showed blistering early speed to lead and he held sway by two lengths turning for home but when Rory Mac skipped into overdrive he forged clear and went on to score by 1-1/2 length from Lovely Banks and Explosive Gas that hit the line in a clump with two others.

“At one stage I didn’t think he was ever going to get there but he did the job well in the end,” Martin said.

“He is still learning and seems to be doing something different every start but he does have ability,” she said.

Rory Mac (Spring Gun-Poa’s Champ) is from a litter of nine that is owned by Ricky Ponting who also bred the litter at the trainer’s property.

“He is a keen railer but he has learned to be more patient about getting to the rail and that’s what he showed us tonight,” Martin said.

Rory Mac had shown enormous potential when he first went to the trials.

“When we first trialled him at Devonport he was clocking good times but for some reason he just didn’t show it in his first few runs in races but that’s all behind him now,” she said.

The dog’s win at Devonport in between his O’Driscoll Coaches series runs was enormous as he raced wide from box eight until crossing down to the fence nearing the home turn and then proceeded to spreadeagle the field and go on and score by almost 12 lengths.

“We were determined to run him at Devonport to try and get his juvenile win at the track and it was going to be dependant on how he came through that race as to whether he started in the final in Hobart.”

“Thankfully he pulled up well and he went on to win the Hobart final.
she said.

Rory Mac’s next assignment will be the Rising Stars series in Launceston that comprise heats on January19 with the final a week later.

“The dog has won in Launceston so he’ll go to the Rising Stars series and depending on how he comes out of that will determine whether or not he tackles the Launceston Cup,” Martin said.