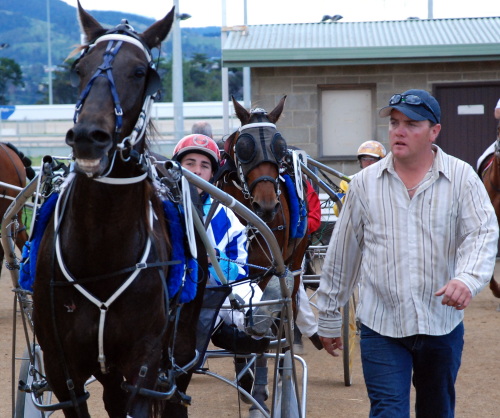 With next Sunday night’s $20,000 Collins Realty Gold Label 4YO his main mission, Rowan Direct (Courage Under Fire-Rowan Countess) gave his rivals a pacing lesson in the Angela Pippos Stakes over 2090 metres for what was the gelding’s first run back in the state in almost a year.

The win was also a boost for the family of the horse’s former owner Damien Sciberras who was tragically killed in a motor vehicle accident in Melbourne last week.

Trainer Allan McDonough said it was just the sort of result he was looking for going into next Sunday night’s Gold Label.

“He pretty much did what I expected him to do tonight but he had to if he is to be a chance in the Gold Label,” McDonough said.

“He needed the run because he hasn’t started since July but he has been in work a while and this run was exactly what I was looking for with the Devonport race only a week away,” he said.

It was Duggan’s only drive at the meeting and it came as a bit of a surprise because the youngster has been working for Victorian trainer Chris Alford for just over a year and has no alignment with the McDonough stable.

“I like Josh’s work ethic. He attends the meetings over there (Victoria) and he’s always willing to give any other trainer a hand and I like that so I wanted to reward him,” McDonough said.

“But I also think he is a very promising young driver and I had no qualms about putting him on with so much riding on Rowan Direct’s performance, in view of the horse’s main mission,” he said.

Duggan was thrilled to be back home and driving a winner at his only drive.