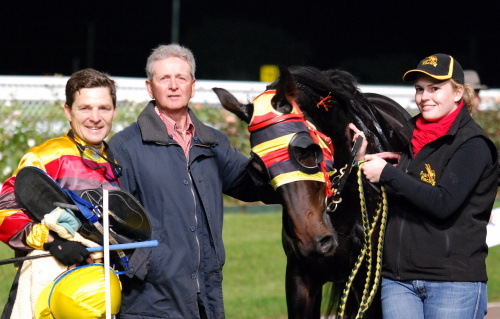 LONGFORD trainer Bill Ryan is predicting a bright future for his lightly raced three-year-old Speed Control following his impressive win in the Bill Bullen 3YO Maiden over 1200 metres at The TOTE Racing Centre in Launceston last night (Thursday).

Speed Control was having only is fourth outing and third start this preparation but the win cam as no surprise as he had been placed at his only two runs this time in.

Punters smashed his price close to race start time, shortening from $3.50 to start he $.2.10 favourite.

With Stephen Maskiell in the saddle, Sped Control settled midfield and while he looked under pressure turning for home, once balanced by his rider the gelded son of Tough Speed-Black Cent forged to the lead and was not fully extended to score by a length from Avici with Minsky Music over a length astern.

Speed Control’s win was the second leg of a winning double for Maskiell who also scored aboard the John Blacker-trained Queen’s Lager in a maiden over 1400m.

Listen to what trainer Bill Ryan had to say about Speed Control after his win – click here .