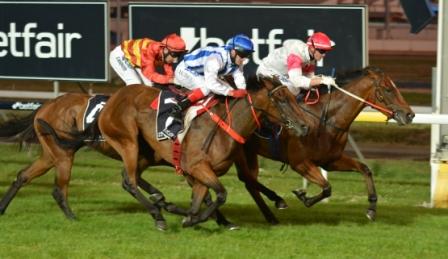 WELL bred filly Ryan’s Daughter Holy Roman Emperor-Elusive Kash) will be aimed at the Tasmanian oaks after her heart-stopping last gasp win in the $30,000 Cascade Brewery Thousand Guineas over 1600 metres under lights in Launceston last night.

With last season’s leading apprentice Bulent Muhcu aboard, Ryan’s Daughter came from last turning for home to get up in the last stride to defeat Shayana by the narrowest of margins.

So close was the photo-finish that it took almost 20 minutes for the stewards to declare correct weight after the trainer of the runner-up John Blacker requested to see the photo finish print.

There were mixed opinions amongst the public gallery but in the end all connections agreed there was a margin in favour of the Troy Blacker-trained filly.

Ryan’s Daughter was having only her fourth start having won on debut before finishing down the track in a class one behind the unbeaten Lady Jane.

“We’ve always had an opinion of this filly and when she flashed home at her start before this race I was convinced she was a genuine winning chance tonight,” Blacker said.

“We’ll head her to the Strutt Stakes now to see if she can run out a strong 2100 metres and if she does do well in that race we will progress to the Tasmanian Oaks,” he said.

The big flop in the race was the favourite Hyperbole that never looked comfortable and was hard at it trying to make ground 500 metres from home.

Shayana was given a gun run by jockey Daniel Ganderton who had the filly placed fourth on the rails and trailing the speed to the home turn.

He guided her into a slot 200 metres out and she took the run and almost achieved the desired result.

Savrajette, from the Bill Ryan stable, finished third and her run was enormous given she was never better than three-wide for the entire journey.

If Savrajette comes through the ordeal without an issue she is also likely to head to the Strutt Stakes (2100m) on Hobart Cup day (February 9).