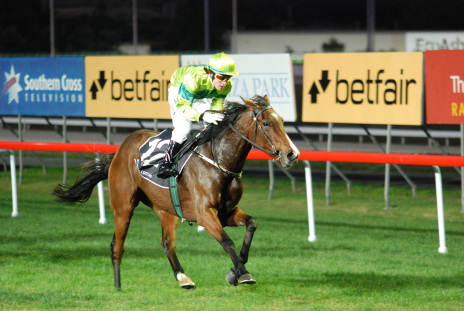 LONGFORD trainer Bill Ryan has produced his share of winners this year and the latest of his stable tenants to excel is Sh’bourne Spirit that scored an emphatic win on debut under lights in Launceston last night (Wednesday).

Sh’bourne Spirit (Savoire Vivre-River Doll) gave her more experienced rivals a galloping lesson, leading from the front and powered away over the concluding stages to won impressively from Genuine Gee and Savannah Cat over the 1200-metre journey.

Ryan was thrilled with the win and predicts a bright future for the daughter of Savoire Vivre.

“We didn’t really know what to expect tonight but she obviously has ability,” Ryan said.

“Her rackwork suggested she could run but it is different when you put them in a race but she’s handled it very well,” he said.

Jockey Yassy Nishitani said the filly was going to win a long way from home.

“She always travelled well for me and I thought on the homer turn that if she kept going like she felt then that she would win,’ Nishitani said.

“She is very green and does things wrong but she is definitely a horse with a future,” he said.