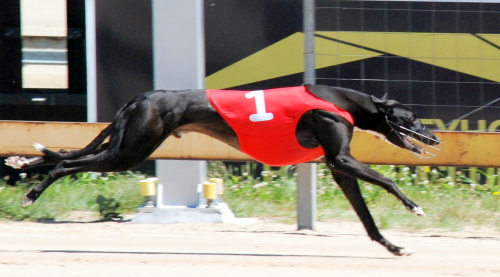 A WELL bred pup by the name of Rybenbrook looks set to make a name for himself in Tasmania following the qualifying heats of the Hobart Maiden Thousand series at Tattersall’s Park last Saturday.

Rybenbrook (Bombastic Shiraz-Flick The Switch) began only fairly from box one but he mustered speed quickly and had the race in his keeping at the top turn.

He extended his lead with every bound and went on to score by over nine lengths from Buckle Up Dozer.

The Mick Stringer-trained dog scampered over the 461 metres in a slick 26.07s for what was his first try from the boxes ion the Hobart track.

Stringer said Rybenbrook was as quick as any dog he has trained.

“I reckon this dog is quite exciting because he’s gone into this qually underdone, although I still thought he would win on what he’d shown me since arriving in the kennel,” Stringer said.

“He is very smart but he does have a bit of an attitude around the kennels.”

“But he’s only young and inexperienced so there’s plenty of room for improvement both on the track and with his manners,” he said.

Rybenbrook is owned by Jason Fletcher from Sydney.

Stringer also produced the second fastest qualifier in Spiritual One that led all the way to win in a time of 26.29s.

Spiritual One (Run’s House-Oodeim Lara) showed good early speed to find the lead from box five and despite being challenged seriously all the way to the top turn he was able to shrug them off turning for home and went on to win by over five lengths from Buckle Up Doug with Loner Joe almost four lengths astern.

Paul’s Kado, a blue dog trained at Bridport by Mick Taylor, also showed enough to suggest he will be a contender for the big prize on Thursday week.

Paul’s Kado (Big Daddy Cool-Crystal Chimes) flew the lids wearing the green vest and was never threatened on his way to a four-length win over Seductive Miss with Harrison’s Look over eight lengths astern.

Former NSW dog Blonde Conquest (Big Daddy Cool-Glossy) looked at home in his heat in which he led and had enough in reserve to stave off the fast-finishing Daisy Jet.

The Eileen Thomas-trained bitch was having her first look at the U-bend circuit.

She began well and held a six-length break nearing the home turn.

Daisy Jet (Fortified Rush-Zoe Laytanna) fell out of the boxes and was a clear last but she improved steadily through the field and flashed home to be beaten less than two lengths.

It was her first outing in a full field.

Launching Power scored a strong win in his heat, stopping the clock at 26.53s.

The David Crosswell-trained dog, that is owned by Australian Test captain Ricky Ponting, made full use of the inside box and was never headed on the way to an almost five-length win over Geez Mouse.

Eifella Jack won the opening heat in a time of 26.66 and Penny’s Angel scampered over the 461m journey in 26.55s for what was a very creditable run given the gale force winds that howled across the Hobart complex.

First starter Pure Doll impressed with her heat win in a time of 26.62s for Broadmarsh trainer Keith Nichols.

Pure Doll (Pure Octane-Portlee) showed good early speed to share the lead to the top turn before kicking clear and she had enough in reserve to hold out Floodwater by a length.

The first four home in each qualifying heat make up the fields for eight heats on Thursday night with the winner of each heat to progress to the final on January 27.