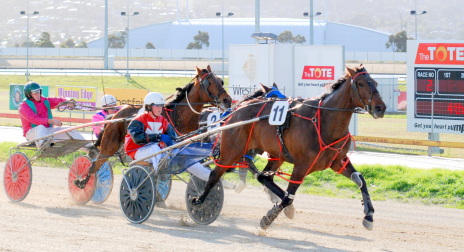 Talented pacer Saab Quality completed an outstanding four year old season with a win at Melton (Victoria) on Sunday afternoon (21 August). The gelded son of Saab was having his second start for the weekend after a solid fourth placing ($4.60) from a poor barrier draw on Friday night at the same venue.

In contrast, Saab Quality ($13.60) enjoyed a perfect run on Sunday in the $20,000 Australasian Breeders Crown Graduate Cup (M0/M1). Driver John Caldow drove through from inside the second line to trail the leader and second favourite Atlas Alliance ($3.50). Just when it appeared Atlas Alliance would hang on, Saab Quality worked home solidly on the sprint lane to win by 2.3 metres in a career best mile rate of 1:54:5 for 1720 metres.

For veteran 73 year old Longford trainer Ian Swain, it was easily the biggest win of his training career. Swain is a former West Australian who trained and drove as a hobbyist from his Albany base before moving to Tasmania in mid 2007. In the ensuing four years, Saab Quality has been his flagship horse winning 16 races and placed eight times from 43 starts for $95,634 in stake money.

Swain, whose finest achievement prior to Sunday night was a training and driving double on one night with Hester Glen at York (WA) in 1968, was elated.

“Put in context, the win of Saab Quality is my proudest moment in harness racing. We were able to reverse the pattern of Victorian’s making hit and run visits to Tasmania for feature races,” said Swain. “I was confident he would handle the schedule of two runs over three days.”

Driver John Caldow was very pleased to secure the pick up drive on Saab Quality and commented he is a handy horse who can go further.

Swain arrives back in Tasmania on Wednesday night and Saab Quality will have a spell for about 10 days while Swain puts some time into the preparation of a two year old half sister (by Lombo Pocket Watch) and a three year old full sister to Saab Quality.

Saab Quality now joins an elite group of Tasmanian pacers who have won 12 or more races in a season (12 months). They are: