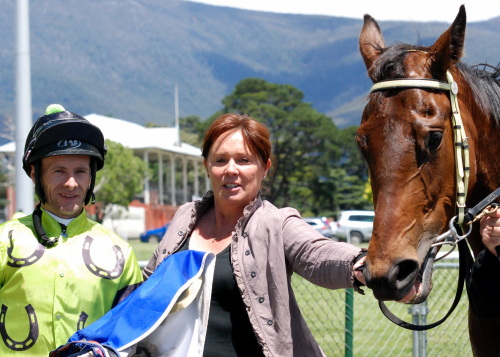 CAMBRIDGE trainer Rhonda Hall declared Kelvin Sanderson the best rider in Tasmania after he guided her mare Prefer A Kiss to a decisive win in a maiden over 1100 metres in Hobart last Sunday.

Prefer A Kiss had been considered by most pundits to be unlucky not to have finished closer at her two previous outings but with the aid of a good barrier and a superb ride from Sanderson the four-year-old finally broke her maiden status.

Hall said Prefer A Kiss hade always shown promise but interrupted preparations had more than likely been the main reason she took so long to win a maiden.

Sanderson had the mare well placed on the rails behind the leaders and she travelled well to the home turn where he eased the mare off the fence.

Once balanced she powered her way to an effortless win over Turf Predator and Gee Gees Dash with the favourite I’m Irresistible a fading fourth.

Listen to what trainer Rhonda Hall had to say about Prefer A Kiss winning in Hobart.