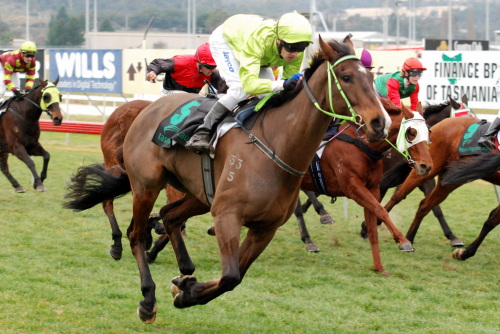 KELVIN SANDERSON took the riding honors at The TOTE Racing Centre on Sunday with a treble, scoring aboard Where To Now in a maiden over 1120m, North Lodge in the Benchmark 68 over 1620m and on 20-1 outsider Raging Baa for Adam Trinder in open handicap.

Sanderson was particularly pleased with the win of the Steve Davis-trained Where To Now as the gelding is part-owned by his wife Belinda Sanderson.

Where To Now strode to the lead on the home turn courtesy of a saloon passage run on the rails and he went on to score comfortably from Rialto John and Empty Handed.

The four-year-old has had only seven starts and signaled he was ready to win with an eye-catching effort at his previous outing in Launceston.

Davis said Where To Now was a promising galloper and expects the gelded son of Good Journey-Anacortina to develop into a handy sprinter-miler.

Listen to what trainer Steve Davis had to say about Where To Now .