Sandhog makes up for missed opportunity 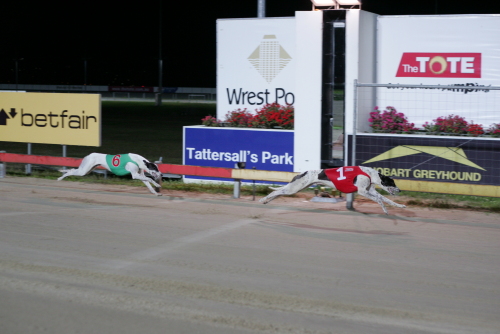 SANDHOG may have missed a berth in last week’s Devonport Cup but he made amends with a narrow but courageous win in the consolation, the Angus Evans Memorial (452m).

The Mick Louth-trained dog was second to the eventual Devonport Cup winner St Pierre in their heat, beaten only a length.

However, in the Angus Evans he had to come from behind, chasing down Regent Typhoon over the final 100 metres.

“We were really hoping to be in the Devonport Cup but that wasn’t to be and winning the consolation is good,” Louth said.

“We’ll keep plodding on fro here and look at the Launceston Cup next month,” he said.

Sandhog campaigned successfully in Western Australia last year and Louth said a return trip to the West also was on the cards.

The Angus Evans is named in honour of the trainer of former champion Lilli Pilli Lad.

Evans was a master trainer and highly respected amongst his peers and the North West Greyhound Racing Club thought it fitting to name the cup consolation race in memory of his contribution to the industry over four decades.