Savannah Cat a work in progress 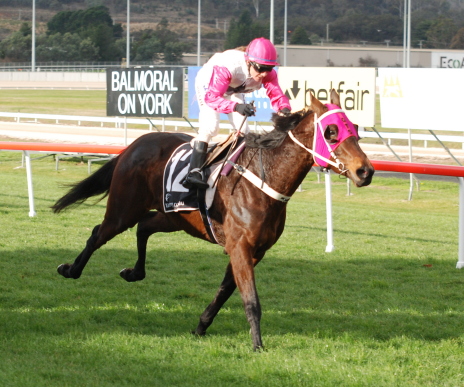 WESLEY VALE thoroughbred trainer Glenn Stevenson has always believed Savannah Cat had the ability to win a feature race but her behavioral quirks have prevented her from achieving that goal.

In Launceston last Sunday Savannah Cat was on her best behavior to record an impressive win in a maiden/class one event over 1600 metres.

The four-year-old mare produced a powerful finish to score from Peggyichi and Strata Star, much to the delight of her trainer.

“This mare has been a real work in progress and what we saw today is probably just a glimpse of what she is capable of but we can’t rely on her doling that every time she steps out,” Stevenson said.

“We bought her at the Inglis sales in Melbourne and she was a known barrier rogue and had to get past two barrier trials before she could r but we still bought her on type for $2500,” Stevenson said.

“When we got her home she passed her first trial but at her next trial she missed the start by four lengths and flashed home to just get beaten in the trial but the stewards wouldn’t pass her.”

“We took her to the Hobart trials and she got her ticket but on the way home she went off in the truck and knocked herself out,” he said.

Savannah Cat was originally trained by top Victorian mentor Matthew Ellerton who thought she had a bright future but one day she refused to go in the barriers and after two unplaced runs as a two-year-old the former owners decided to sell.

Stevenson produced Savannah Cat for her Tasmanian debut in August last year in which she finished an eye-catching third.

After two subsequent seconds she was sent for a spell.

The mare returned to racing with a third in a maiden in Launceston on Anzac Day but at her next start on May 12 she finally broke her maiden status in a strong maiden at Mowbray over 1400 metres.

“Stepping her up to the longer trip (1400m) helped and I believe she will be capable over distances up to 2100m,” Stevenson said.

Even though Savannah Cat (Hold That Tiger-African Breeze) has won two in succession, her trainer is not convinced she is now a genuine competitor.

“I know that she could still do something silly at any given time, that’s just the way she’s made,” he said.

“If we could take the blinkers off her and get her to settle and sit off the pace she’d knock up winning races.”

Savannah Cat is owned and raced by Kimble Fraser, Mykael Burnett and Nick Archer who are former workmates of Stevenson’s.

The mare has been ridden in all of her Tasmanian races by the in-form Shannon Brazil.

“Shannon (Brazil) has done a great job with this mare. When nobody wanted to ride her even in trials Shannon kept putting her hand up and she has been rewarded for her loyalty and courage.”

“It’s good to see Shannon doing so well because she is a top rider and a good person,” he said.