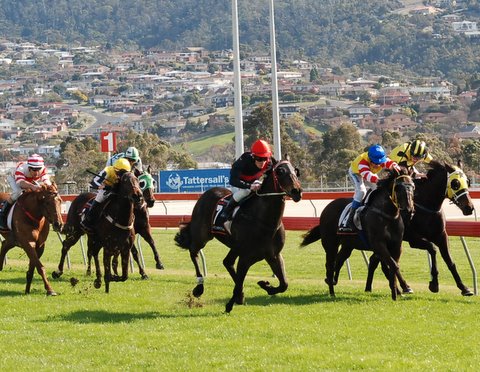 FIVE-YEAR-OLD gelding Scorching Ed followed up an impressive third at Launceston last start to win in fine fashion in the 1600 metre 0-66 Handicap at Tattersall’s Park on Wednesday.

The Terry Roles trained gelding proved too strong in the final 100 metres, with jockey Remi Tremsal patiently timing his run out wide to swamp the field in the closing stages to record the gallopers first win in over a year.

“After a furlong I felt confident” Tremsal said.

“He was travelling sweetly for me. The race panned out perfectly as he was able to sit back and let them battle away up front” he said.

Scorching Ed won by a length over Kickboxer with Samsonic the rank outsider finishing third after a gutsy effort to nearly pinch it after going for home at the 600 metre mark.

Deloraine trainer Roles thought his gelding could produce again after a solid performance at Launceston over the 1400 metres.

“On that run I really fancied his chances here today. He loves the wet and he excels in these conditions”

Connections also own another Roles trained galloper Flamburr, who has won 6 races fetching over $76,000.