Scoville makes it two from three on synthetic 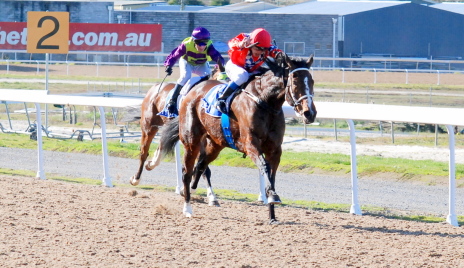 SMART three-year-old filly Scoville made it two wins from her last three tries on the Tapeta synthetic at Spreyton Park last Sunday but much to the dismay of most punters.

Despite having scored impressively in a maiden in mid-June she was sent out as a $16 outsider while the big money came for the Barry Campbell-trained Guru Rez that was sent around the $3 favourite with strong support for Sugar Gum ($7 into $5) and Oxy Angel ($5.70).

With in-form apprentice Bulent Muchu aboard, Scoville showed good early speed but despite connections not wanting to lead, the Turkish apprentice had no option but to find the front from where he had to ensure the filly didn’t over race.

There was plenty of speed but with nothing pressuring Scoville, Muchu was able to allow her to conserve some energy midrace and when he turned for home he asked for an effort and she sped clear.

The Gary White-trained filly went on to score comfortably from Guru Rez that came from well back on the home turn with Genuine Gee, that had trailed Scoville throughout, a close-up third.

It was Scoville’s second win from only nine starts.

Listen to what trainer Gary White had to say about Scoville’s latest win – click here .