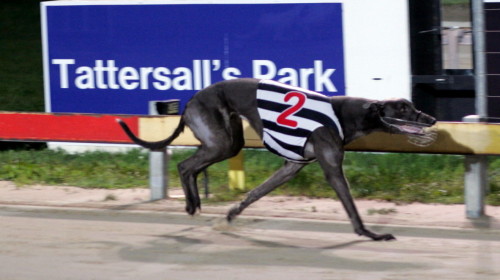 A SCRATCHING from this Thursday night’s $107,000 Wrest Point Group 1 Hobart Thousand has paved the way for a Tasmanian greyhound to contest the event.

NSW dog Belles Pace suffered a dropped back muscle during a trial at Brighton last Sunday which not only ended his Hobart Thousand campaign but possibly his racing career.

Trainer Sam Sultana left the dog in the care of top Tassie mentor Shane Whitney who acted on instructions from Sultana to give the dog a “strong workout” at Brighton last Sunday.

“Unfortunately the dog dropped the back muscle and that was the end of his Hobart Thousand chances,” Whitney said.

“Sam (Sultana) flew over on Monday morning to have a look at the dog but when he saw the extent of the injury he conceded the dog would not race on Thursday and possibly never again,” he said.

While it is devastating news for Sultana and the dog, it was good news for Tasmanian trainer Mick Stringer who had both reserves in the final in Hellbound and Lettuce Leaf Lad who were the second and third-fastest second placegetters respectively in their heats.

Until the scratching the race was void of any Tasmanian dogs, which would have been a first since the inception of the race in 1935.

Stringer won the race last year with Little Spaniard and he also provided the runner-up in Topline Doovee.

“I’m disappointed for Sam (Sultana) because there would be nothing worse than having a chance at winning a Group 1 race and have the dog get injured on the eve of the race,” Stringer said,

“But I’m also rapt to at least have a runner in the race and have the home state represented,” he said.