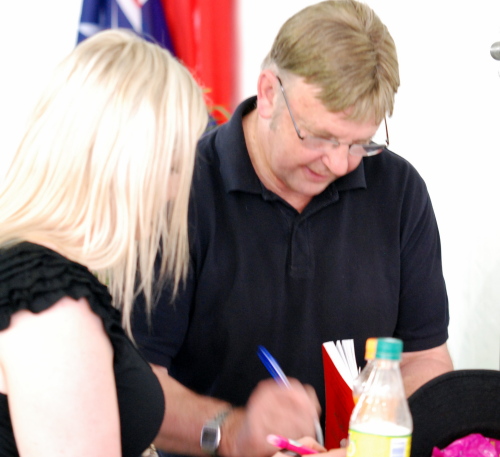 PROMINENT standardbred owner-breeders John and Cecilia Reid presented five yearlings at the annual Tasmanian Premier Yearling Sale in Launceston on Saturday but none of the youngsters were sold.

But they did manage to walk away from the sale as the purchasers of the top-priced yearling.

The Reids paid $20,000 for a colt by Lis Mara from top producing mare Marlee Jayne that was offered at the sale by Col Johnson.

A record 67 youngsters went under the hammer and while many were sold for figures beyond $10,000 the majority of the yearlings were bought back by their breeders.

Reid said he had hoped the son of Marlee Jayne was legitimately “on the market” when he arrived at the sale.

The majority of the yearlings offered for sale were bought back by their breeders.

The quality of horseflesh to pass through the ring was high with lot 19 one of the most precocious.

Lot 19, a striking black colt by JR Mint from Mon Poppy Mary, was knocked down to Greg Pearton for $11,000.

Pearton has enjoyed a lot of success in recent years, in particular with his now three-year-old Quastor Centurion that was last season’s stand-out two-year-old.

“I liked this yearling because it was a very nice type and it traces back to Quastor Centurion,” Pearton said.

Other lots to sell for decent money were Lot 35 (JR Mint-Alto Miss) that went to Devonport owner Eric Blomquist for $11,000.

Brighton trainer Adrian Duggan never misses a Tasmanian sale and this one was no exception.

Duggan was keen on Lot 60, a Life Sign filly from the Village Jasper mare Annbolyn that was offered by Big Park Stud.

He was surprised to secure the filly for a modest $5000.

Listen to what Adrian Duggan had to say about the Life Sign filly – click on the audio file below.

Maxfield Standardbreds and Bill and Tamra Fawdry offered nine yearlings between them with Maxfield’s Lot 54 (Art Major-I Decline) encouraging spirited bidding that stopped at a sale-topping $22,000.

But it was Maxfield’s bidder who was successful, which ensured the breeder took the youngster home along with the other four he put through the ring.