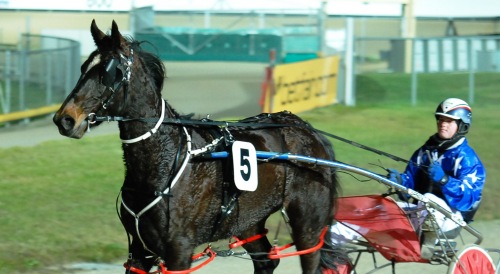 STOWPORT trainer Craig Hayes has bred some handy horses in recent years and the latest of his bred to show talent is lightly raced two-year-old Semose Twenty that scored an impressive win at Tattersall’s Park in Hobart on Sunday night.

Semose Twenty (Jet Laag-Gallavance) was having only his third start but he showed the manners of a more seasoned racehorse by facing the breeze for most of the race before forging clear to score comfortably over Bymarjac and Bettors Express over the 1609-metre journey.

Hayes was optimistic about the youngster’s future.

“He is still very green but what he’s shown so far would suggest he might develop into a very nice three-year-old,” Hayes said.

“After his first race back in December I had to tip him out because he didn’t appear up to it but we discovered shortly after that he had a foot abscess so we had to wait until that healed before we brought him back,” he said.

Semose Twenty resumed with a game second in Hobart on May 30 behind the highly promising Apache River.

“His first-up run was solid so we expected him to win tonight on the strength of that run,” Hayes said.

“I asked Gareth to just nurse him because he can do a few things wrong but that’s just inexperience.”

“He’s won this race on natural ability, which is why I believe he will be a better three-year-old.”

“He is a half-brother to my former top two-year-old Mister Tehaych but that horse was a natural runner and ready-made two-year-old, whereas this horse is not,” he said.

Hayes is toying with the idea of heading Semose Twenty to the Sires Stakes series (Dandy Patch) but it will depend on how the gelding comes tough this latest ordeal and how he is at the time of nominations.

“If he is still feeling good in himself near the time of the Dandy Patch heats in the first week in July then that’s where we’ll go, otherwise I’ll tip him out for a decent spell,” Hayes said.