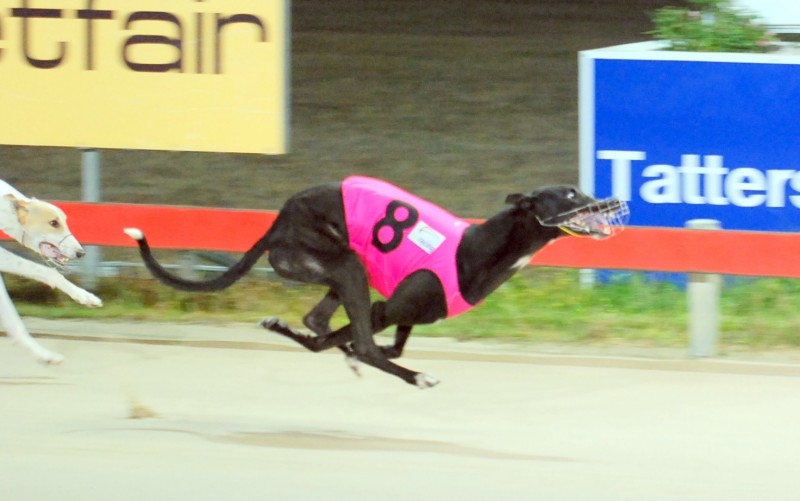 WELL bred pup Sentry Duty notched his first win in a juvenile in Hobart tonight (Thursday)  but it won’t be his last according to his trainer Mick Stringer.

Sentry Duty (Aston Galilee-Patsy Anne) was having his eighth start and went into the race with five minor placings to his credit.

Despite his consistent form punters rallied for the Debbie Cannan-trained Sweet Bay to send her out the $3.10 favourite while Sentry Duty‘s price drifted from $2.20 to start at the luxury odds of $3.70.

Sentry Duty began well from box eight but not as quick as the reserve and rank outsider Ultra White ($35) that flew the lids from box two to land three lengths in front soon after the start.

Sentry Duty moved closer and had the leader in his sights turning for home before slipping into overdrive and went on to defeat the Morrie Strickland-trained UIltra White by two lengths with Burma Roo a length away third.

“He has been missing the kick a bit lately but he began a lot better tonight and that’s made all the difference,” Stringer said.

“I am quietly confident he will get a bit of ground because he is quite a strong dog,” he said.

Sentry Duty is owned and raced by Bill and Ann Witherden who have enjoyed a lot of success with the litter.

“A few of his litter siblings such as Yappin Jack, Orange Boy and Battek Boss go really well but this one might be a handy stayer later on,” he said.