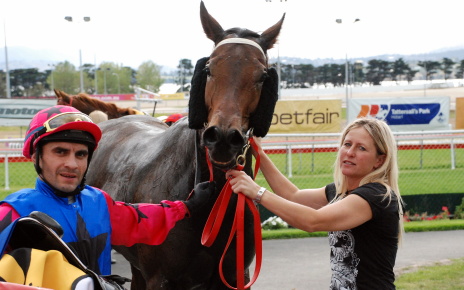 With David Pires in the saddle, Serpents View showed his customary early speed to lead from a wide draw but unlike at his three previous outings the gelding was left alone in front and that paved the way for an impressive victory.

Serpents View kicked six lengths clear 500 metres from home and he had enough in reserve to score by almost three lengths from first-starter Penny’s to Gold with Sand Or Stars just under a length away third.

Serpents View was paying better than $10 about five minutes before they jumped but the gelding was crunched on the tote to end up paying $3.40.

It was a jubilant Burt after the race and she almost snared a double when her stayer Maywyn on Tuesday went within a neck of taking out the benchmark 68 over 2100 metres.

“I’ve only got two horses in work so had Maywyn on Tuesday won it would have been a fantastic day but I’m happy enough that Serpents View finally broke through,” Burt said.

Listen to what trainer Christie Burt had to say about Serpent View’s win – click on the audio file below.