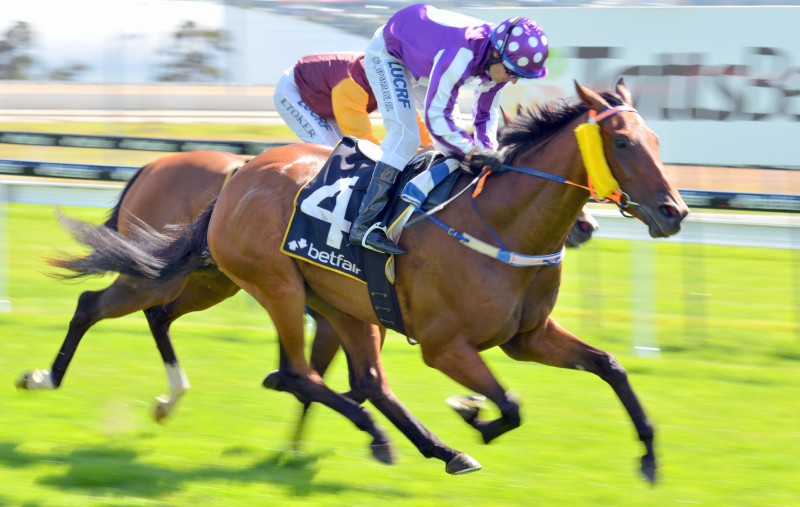 PROMISING three-year-old Settler’s Stone proved he could have a future as a stayer when he scored an impressive win in a benchmark 62 handicap over 2100 metres at Tattersall’s Park in Hobart last Sunday.

The Troy Blacker-trained gelding went into the race on the back of successive wins in maiden/class one races over 1600m in Hobart and Launceston and completed the hat trick in style carrying 58.5kg.

It was his first try beyond 1600m but he handled it with ease, according to his jockey David Pires.

Settler’s Stone settled worse than midfield in a solidly-run race with Hold On setting a solid pace ahead of stablemate Our Anna and Delightful Weekend with the top weight Player One content to trail the field with apprentice Kyle Maskiell aboard.

When Pires eased Settler’s Stone three-wide to make his run 650m from home he showed  a good turn of foot to get into the race but when Queen of Eight kicked three lengths clear in the straight she looked set to win.

But Pires said his charge attacked the line.

“The best part of this win is that when my horse caught sight of the leader properly in the straight he laid his ears back and had a real crack at running her down,” Pires said.

“I think he is a horse with a future,” he said.

Blacker is out of the state and won’t be back until later this week but hinted the gelding would be either spelled or be aimed at a BM72 handicap over 2100m in Hobart on March 29.

Settler’s Stone is owned and raced by a group of 14 including this writer (Peter Staples).