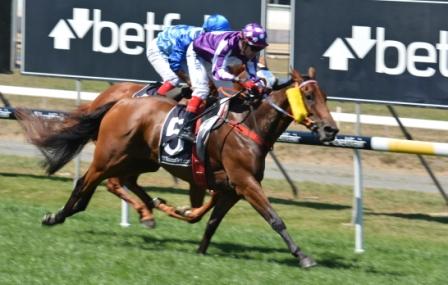 WELL bred three-year-old Settler’s Stone proved his win on Hobart Cup day in a maiden-class one over 1600m was no fluke by mirroring that effort in a similar grade race at The TOTE Racing Centre in Launceston yesterday.

Settler’s Stone produced a form reversal to win in Hobart coming from last 500 metres from home to edge out the well backed favourite Helluce in a slowly run race over 1600m.

The Troy Blacker-trained gelding had been less than impressive at his three previous outings but his trainer was always confident he would deliver once he stepped out over more ground.

While his win on Hobart Cup day was a shock ($65) punters were more interested in yesterday’s race as he firmed from $6 to start the second elect at $5.30.

Top Victorian rider Dean Yendall partnered the gelded son of Savoire Vivre-Rock Chick (x Octagonal) to his Hobart win and he was back aboard yesterday in the Country Club Tasmania Maiden-Class One over 1600m.

Settler’s Stone settled just worse than midfield on the rails as Yendall allowed the gelding to find his rhythm.

He persevered for a rails run from the 600m to the home turn and when he urged the gelding off the rails to challenge 150 metres from home he ran down the leader and went on to win by a almost a length.

“It was just a matter of time for the penny to drop with this horse and now that he’s starting to realise what racing is about he will continue to improve,” Blacker said.

“His win in Hobart was excellent to come from where he was in the run to win and today he has shown more improvement.”

“We are taking small steps with this horse because he might have the potential to develop into a cups horse but only time will tell,” he said.

Settler’s Stone is owned and raced by a syndicate of 14 that includes this writer (Peter Staples).

Blacker said Settler’s Stone is likely to have his next start in a BM62 over 2100m in Hobart on March 8.

Watch the Troy Blacker talk about his Launceston Cup runner, Keukenhof, in one of the insightful videos as part of the 2015 Betfair Tasmanian Summer Racing Carnival Tassie Carnival Contenders.