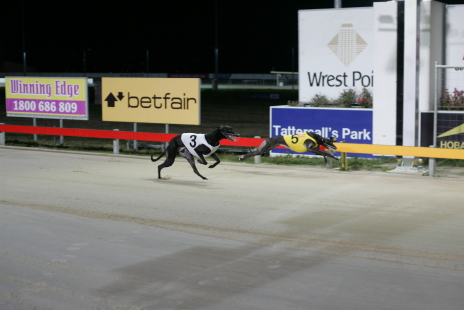 Shanlyn Joaney was the only greyhound covered in the last leg getting there by the smallest of margins a nose.

This daughter of Shanlyn Prince had to chase hard all the way with Gable Brent scooting to the early lead recording splits of 8.03 and 12.80 and having a handy lead up the home straight.

Shanlyn Joaney got bumped early but railed hard to grab Gable Brent on the line with Sheffield’s Ged Mace grabbing third with pup Even Force.

Joaney’s time of 25.97 certainly wasn’t the quickest of the day, that honour went to Wata Smartie (25.63), but she showed a willingness to get to the line and that was what Moate was most pleased about after her run.

Moate backed up with a double when kennelmate Centennial Bark overcoming “an unsuitable box draw” to lead almost all the way.

Pendle Beri asserted his authority on the Balmoral On York juvenile running home strongly after being checked early to pick up his litter sister, the Michael Louth trained Decibel to win by 1 1/4 with early pacemaker Hellyeah Stella, 8.02, 12.79 hanging on for third, a further 1 3/4 lengths away.

Pendle Beri named after the possession winning Collingwood football player has now won his juvenile grade on all tracks and collects the $300 Tasbred Juvenile Bonus.

Genista Flight had big wraps on her after winning at her first start at Devonport in October last year, but has failed to register another win until yesterday.

Ken Mayne has been helping Leon Brazendale for the last year or so but has only just started training for himself and Jaylei Julie brought up his first win after purchasing her from Gary Johnson.

Congratulations Ken and we hope there is many more wins to come.