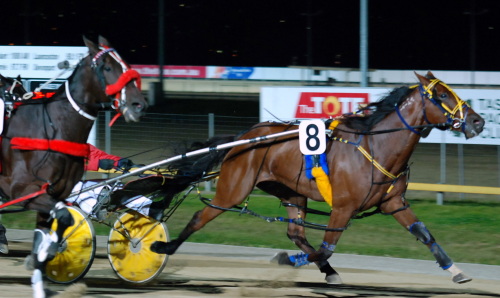 VICTORIAN pacer Shardons Rocket ended his Tasmanian campaign on a high when he powered home to win the inaugural Plunkett Family Ascot Gold Cup over 2579 metres at Tattersall’s Park in Hobart tonight (Sunday).

Shardons Rocket won the Metropolitan Cup at his first outing in Tasmania but he failed to flatter in his major mission which was the Easter Cup in Launceston on Easter Sunday.

But back on the Hobart circuit he mirrored the effort that gave him metropolitan Cup success.

His trainer-driver Grant Campbell settled the five-year-old Pacific Rocket gelding worse than midfield and waited until the final lap to make his move.

He emerged from the three-wide train in the back straight to set sail after the leaders and had them covered turning for home.

Shardons Rocket then had to hold out the fast-finishing Charleys Dream that loomed as a genuine winning hope 100 metres out but Campbell’s charge dug deep and had two metres to spare on the line while Gettysburg Address ran on well for third.

Campbell said the gelding had done a good job during his time in Tasmania.

“While we came here specifically for the Easter Cup winning this race and the Metropolitan Cup was a good result,” Campbell said.

“We didn’t have any luck at all in Launceston so maybe we have to target Hobart races.”

“We leave with two good wins and it is great to have won the inaugural Ascot Gold Cup race because there is a bit of history behind it and I’m particularly interested in that sort of thing,” Campbell said.

Shardons Rocket will travel back to Victoria this week and Campbell confirmed the gelding would most likely be sent for a well-earned spell.

The Ascot Gold Cup was run for the first time in 1934 at the now defunct Ascot racetrack that was located near New Town, a northern suburb of Hobart.

It was won by Ashton that was owned, trained and ridden by Roderick “RG” Plunkett.

“The Plunketts have been an integral part of harness racing for many generations and it is great to be able to see this race Ascot Gold Cup reintroduced to the feature race calendar,” Kennedy said.