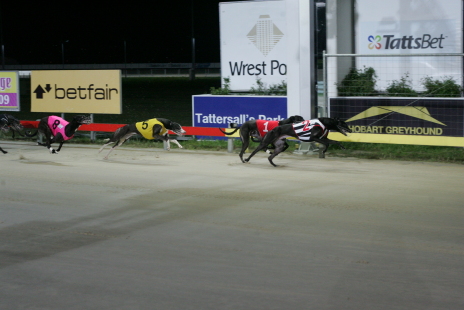 Exciting pup She’s All Class (R1) from the Longford kennels of David Crosswell looks to possess star qualities if her first two starts and wins at Devonport was anything to go by.

Winning the heat and final of the Maiden series effortlessly this daughter of It’s A She ran 25.87 and 25.91 which were both best times of the day and she looks a special to get punters off on the right foot at Tattersall’s Park tonight.

Hardest to beat should be last week’s runner up Cointreau Cap while Fine Eagle will continue to improve and should be followed over his next few starts.

Minister’s Gift Heats dominate the program with points be allocated based on finishing position, added to the previous round of heats at Devonport to make the lucrative $10,000 Final at Launceston Monday week.

Tiny Tilly (R4) looks very hard to beat jumping from eight but will have to contend with prepost favourite Martello Towers and is backing up from a solid run Tuesday. Exo Energy (R8) again from the Crosswell kennels should dominate his heat off the red while Mick Stringer’s Captain Cosmic (R9) continues to run consistently and should gather enough points tonight to make the Final.