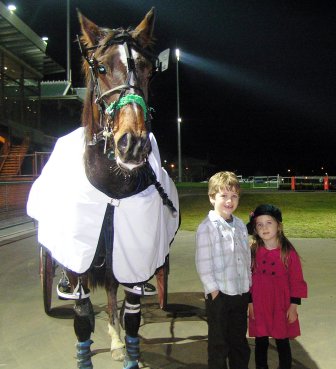 OUTSTANDING filly Shez Ryleymak created history last night when she was named Tasmanian Horse of the Year for the second season in succession.

She becomes the first to win the Horse of the Year title as a two and three-year-old.

The filly also won the top 3YO filly title, which was a unanimous decision.

Shez Ryleymak finished her 3YO season as the highest stake earning filly in the history of Tasmanian harness racing with $182,833.

The Rohan Hillier-owned and trained filly was a unanimous choice with her six wins and five minor placings from 12 starts and almost $80,000 in stakes testament to her ability.

“It’s fantastic for her to win this top award two years in a row and especially to become the first to win it as a two and three-year-old,” Rohan Hillier said.

“The filly had a good season but we were still a bit disappointed how things panned out in Sydney because she copped a bout of colic on the boat trip to Victoria so she was a bit behind when we got to NSW for the Oaks.”

“Had she been at her top I have no doubt she would have won the NSW Oaks but it wasn’t to be,” he said.

Shez Ryleymak, who is named after Rohan and Katrina’s children Ryley and Makenna, has been back in work for a fortnight and Hiller expects her to be back racing in late November.